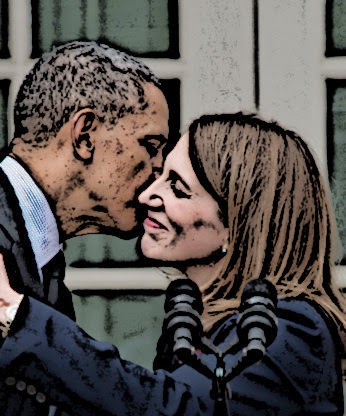 Sylvia Mathews Burwell—who was deputy chief of staff to President Bill Clinton, among other roles—currently serves as Obama’s director of the Office of Management and Budget.

“When the government was forced to shut down last October…Sylvia was a rock, a steady hand,” Obama said in a Rose Garden ceremony this morning. He repeatedly praised Sebelius for her leadership and noted that Burwell’s “prudent manager” skills would be needed for the “tough challenges” of running the nation’s health agency.

Sebelius, widely blamed for the botched rollout of the Affordable Care Act’s online health exchanges and other mishaps, said HHS was making “tremendous progress” to implement the health law known as Obamacare.

One more glitch plagued Sebelius, though, toward the end of her remarks. ”Unfortunately, a page is missing,” she said calmly, before ab-libbing the remainder.

She leaves after five years, despite saying only days earlier that she would stay with HHS through November.

Burwell said that she looks forward to further implementing Obamacare. Among lawmakers and pundits praising the nomination was Sen. John McCain (R–Ariz.), who said on Twitter: “Sylvia Burwell is an excellent choice to be the next #HHS Secretary.”

However, Burwell could be in for a tough confirmation process. Although she was easily confirmed by the Senate a year ago to head OMB by a vote of 96-0, this time — ahead of the mid-term elections – she could face resistance, as Politico reported.