This week, the Bureau of Land Management has been attempting to confiscate the cattle of Cliven Bundy, the last rancher in Nevada's Clark County. On Wednesday, BLM agents confronted the Bundy family and supporters, using attack dogs, tasers and stun guns. Bundy's son was tased and his daughter thrown to the ground. Three others were injured. Bundy supporters eventually drove the BLM off, but not before they had taken some cattle. 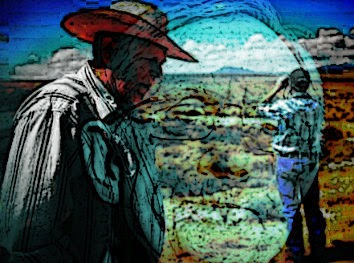 The BLM claims the cattle are "tresspassing" on land designated for the endangered desert tortoise. This designation is a red flag that something else is going on. Desert tortoises have co-existed with cattle for over 100 years and the cattle offer no threat.

Sure enough, as Dana Loesch reports today in a great piece of investigative journalism, Senator Harry Reid, known as "Cleanface" by the Nevada mob, and named by Judicial Watch as one of Washington's "Ten Most Wanted Corrupt Politicians," has been using the BLM to seize rangeland on behalf of campaign contributors. One of Reid's former senior advisors, Neil Kornze, was recently appointed to lead the BLM, but he has worked there since 2011, and been de facto leader for at least a year. According to Loesch, Reid even ordered BLM to alter boundaries of tortoise habitat to allow top contributor, Harvey Whittemore, to develop the land. Yet another compassionate Democrat concerned for the environment. Good old Cleanface.

All other ranchers have been driven out of the county, but Bundy refuses to bend. The BLM claims Bundy owes them grazing fees dating back to 1993, however, he says his grazing rights predate the BLM, his family has used the land since the 1800s and those rights should have been grandfathered in. Contrary to BLM's accusations, Bundy has been paying grazing fees, but to the governmental entity he believes has true title to the land: Clark County, Nevada. Loesch relates:

The BLM arrived much later, changed the details of the setup without consulting with Bundy — or any other rancher — and then began systematically driving out cattle and ranchers. Bundy refused to pay BLM, especially after they demanded he reduce his heard’s head count down to a level that would not sustain his ranch.

The BLM may have authority under the Taylor Grazing Act of 1934. Bundy says that "public land" belongs to the citizens, but the court claimed that “the public lands in Nevada are the property of the United States because the United States has held title to those public lands since 1848, when Mexico ceded the land to the United States.” In justifying the seizure the court stated "Bundy’s cattle have caused and continue to cause damage to natural and cultural resources and pose a threat to public safety." It would be interesting to see the justification for that claim. What "cultural resources" exist in that open, undeveloped, remote area, and what was the damage to natural resources? Certainly not the tortoise, which they used as an excuse to close the off the land in the first place. What they really want is the land.

The desert tortoise is so "endangered" in this area, that the government is planning to euthanize some of them. Furthermore, the tortoise was virtually extinct before people even settled the area. Ranchers actually improved its prospects by accessing springs and developing other water sources, according to Myron Ebell, Director of the Competitive Enterprise Institute's Energy and Environment Center. But with the extreme environmentalists at the Interior Department no good deed goes unpunished, because they want the land, period.

The government's agenda in this and many other land confiscation activities is actually motivated by Agenda 21's "Rewilding" program, which advocates pushing humans out of rural areas entirely, and into densely packed urban zones. The idea was a brainchild of Dave Foreman, founder of EarthFirst! who popularized the use of tree-spiking to prevent logging. Read here how it's working out in California. However, these environmental hypocrites have all shown their true color when these "precious lands" subsequently are sold, developed or otherwise used to benefit the politicians who fixed the deal.

The politicians who fixed this deal are Senator Harry Reid and his son, Rory. And they did so on behalf of the Communist Chinese who intend to build the largest solar energy complex in America. Reuters reports:

[Reid] and his oldest son, Rory, are both involved in an effort by a Chinese energy giant, ENN Energy Group, to build a $5 billion solar farm and panel manufacturing plant in the southern Nevada desert. Reid has been one of the project’s most prominent advocates, helping recruit the company during a 2011 trip to China and applying his political muscle on behalf of the project in Nevada.

“His son, a lawyer with a prominent Las Vegas firm that is representing ENN, helped it locate a 9,000-acre (3,600-hectare) desert site that it is buying well below appraised value from Clark County, where Rory Reid formerly chaired the county commission.” (Emphasis added.)

So now we get the true picture. Likely Clark County political corruption going along with this. All for the tortoise, that will doubtless become completely extinct when this massive monstrosity blankets its ground. This issue needs to be fought at every level and Harry Reid & Co. need to be brought up on charges!

Bundy is getting some support. Sheriff Richard Mack, founder of the Constitutional Sheriffs and Police Officers Association, is traveling to the ranch along with some fellow CSPOA members, and state representatives from Arizona and Nevada, as well as Nevada's governor, Brian Sandoval, have issued criticisms.

Sandoval has taken a wait and see attitude. "Earlier this week, I advised the BLM not to limit or hinder the constitutional rights of Nevadans and be mindful of its conduct..." he said. Clearly the BLM has done neither. Will Sandoval let them get away with it? It is now clear what is happening. Will Sandoval allow this fraud to continue? Is he part of it? This is a telling moment for the Republican govenor. Will he do his job and honor his oath to "support and defend the U.S. Constitution from all enemies foreign and domestic?" Right now it appears that we are lookng at enemies both foreign and domestic.

The legal issues on the land rights may be debatable, but the federal government's increasingly despotic behavior toward defenseless citizens is completely without justification. Furthermore, its alleged reasoning is outrageous, given what we now know about the filthy handed, "Cleanface," Harry Reid.

This is a defining issue and a defining moment in U.S. history, one that should be at the forefront of our nation's attention today.

Is the root of this what was promised the ChiComs as collateral for our loans?
Hitlery was heavily involved in this... are they being given free rein because we owe them?? It is happening in northern Idaho with their tax free city.
Where is the MSM? Where is the F'n MSM?

Reid's former technical adviser, Jazko, was removed from the Nuclear Regulatory Commission because he was using the same strong-arm tactics on the staff and the other commissioners, all to stop Yucca Mountain.

Little Barry has the ability to make this go away. Why has he not called this back for review?
It is because he is "good at killing people", he wants to pull the trigger. He is the problem.

>>"This is a telling moment for the Republican govenor. Will he do his job and honor his oath..."

You've got to be kidding. He's a Republican. He'll fold.