Caleb Howe reports that the Harry Reid-controlled Bureau of Land Management (BLM) has raised the white flag and will cease its paramilitary operation against the Bundy family.

Fox News is reporting that the Nevada standoff between the Bureau of Land Management and the Bundy Ranch has come to an end. The feds are pulling out because it has become too dangerous for their employees and the public. In other words, the Bundys win... 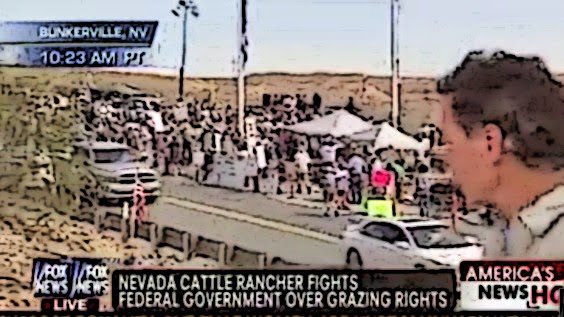 Fox reports that 400 of 900 cattle have already been rounded up, but the operation is now ended before it was completed. This means that the intervention of the activists and supporters who have camped out near the disputed area was successful. The crowd, claiming that victory, cheered loudly as the sheriff announced the end of the operation.

The BLM is controlled by one of Harry Reid's cronies.

Given Reid's long history of troubling, sleazy deals, all of the attention on the Senate Majority Leader (thank you, Dana Loesch) seems to have paid off.

It's all but certain that Reid was behind this land grab and I would bet that a close investigation would reveal more crony deals of the sort for which he's infamous. Maybe someday we'll have a real media -- actual journalists and not partisan hacks -- who will investigate this sort of government-run-amok madness.

The seriousness of the charges demand an investigation.

I hope this goes viral and millions see what a corrupt slug Harry Reid is. And he has the NERVE to criticize the Koch Brothers. Reid is lower than whale poop - and, frankly, I don't think he gives a damn. He knows nothing will happen to him and he won't be held accountable for any of his illegal activities, so, why not? The only reason he and his cronies shut down the "raid" was because they were exposed by a courageous rancher who stood up to their corruption - and it looks bad for them politically. If Bundy had not stood his ground - they would have steamrolled right over him and his family. THIS is American government??????? I feel like I'm living in the Twilight Zone.

Remember, when attacked by a mob of Clowns, be sure to go for the juggler !

This is a good day.

It gives those who are unprepared for the coming storm more time.

It does NOT delay the inevitable.

The Fox News story contains NOT ONE MENTION of Harry Reid. I wouldn't have read it, had it not been linked on Breitbart. Just another reason to limit one's consumption of FNC.

Harry Reid's corruption goes back to the 70's. When he Nevada's Gaming Commissoner. He was linked with organized crime bosses who owned casinos. This is how he got his money. Or course this could never be proven.

Mr. Bundy and his family may never be safe again.

As for the "militant wing" of BLM? There is no such thing. Every bureau seems to have uparmored, armed, and is ready. And... they better be. They are still going to lose. May they rot in hell.

And 3-6 weeks from now when everybody has forgotten about this, they will come sweeping back in, arrest the family, confiscate all the cows, file criminal charges for everything they can possibly think of, and bankrupt the ranchers for their crime of standing up to the government.

This IS about what Obama has borrowed and how he is helping the ChiComs gain equity for their loans.
The selling of America:
http://www.wnd.com/2014/04/reid-smelling-anything-but-rosy-in-ranch-fight/

This isn't over yet. Not by a long shot. You think the Feds gave up THAT easy? No chance.

where were the liberty loving Republicans while US government was using communist methods to steal this man's property?
Silence from useless Washington Republicans !!!!!!!!!!!!!!!!!

Reid is a disgrace to the government. He needs to spend somemore time in his old hiding place, Mustang Nv.