If we were counting everyone defying New York's unconstitutional "SAFE Act", we could call this the 'Million Shredder March":

Citizens in Buffalo, refusing to comply with the SAFE Act by registering their so-called ‘assault weapons’, gathered today on the deadline for SAFE Act registrations and SHREDDED their gun registration forms... 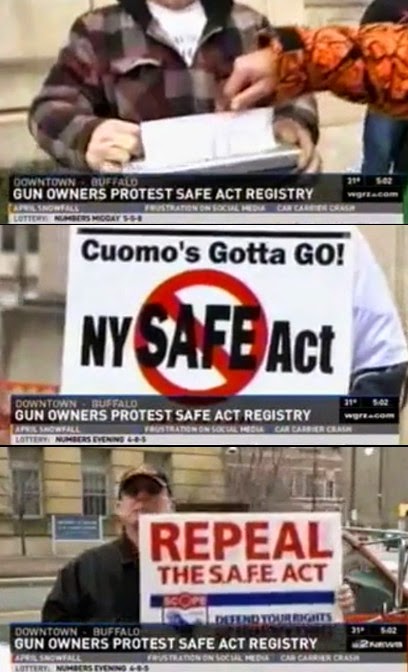 They had planned to burn them, but since open burning isn’t legal in Buffalo, they decided to shred them instead, just as our elected officials are shredding the Constitution. Their hope is to send a message to Cuomo that they will not comply with this unconstitutional law.

WIVB has some background on this lawless mess:

April 15, 2014 marks the deadline for when people who owned assault weapons prior to the passage of the SAFE Act were supposed to register them with New York State... The SAFE Act redefines an “assault weapon” as almost any semi-automatic weapon with a “military-style feature,” including a telescoping stock, long guns with a pistol grip, or the ability to hold a detachable magazine.

..Those types of guns can no longer be bought and sold in New York, but people who already owned them are “grandfathered” in to the law, so long as they register the weapon or have the guns permanently modified so that the “military” features are inoperable... Those who don’t comply with the SAFE Act’s requirements could face a misdemeanor charge of failure to register their weapons, up to a felony charge for illegal possession of an assault weapon.

I was thinking about headlining this article: "Gun owners tell Andrew Cuomo to drink a big, tall glass of "Go **** Yourself" juice, but that would be impolite.

But, oh so appropriate for Lil Mario!

Progressives are impolite on a daily basis - even crude and nasty.
I would have loved your thought of headline about Cuomo.....!

CRITIQUE OF. “Feds Grant Eminent Domain as Collateral to China for U.S. Debts .” by Bernadine Smith. This is written in response to criticisms regarding the ...


Another 1,665 acres US property (deemed federal land) to be handed to the UN. "The action he is taking next week will bypass Congress,..."


"The far-reaching fate for a captive new human society is not being planned in Washington, D.C., but in New York City.
That fate is no longer somewhere off in the distant future but is being made ready to eclipse all of human society—by the end of 2015.

The sovereignty of all nations will be swallowed whole in the United Nations ‘Post-2015 Development Agenda’, and that’s only the nightmarish beginning of the coming new life on Planet Earth."


Meanwhile, all nations who care about their people should stop funding the UN. It is impossible to take over the world without money.

May 21, 2012 ... Obama, Clinton work in secret to surrender U.S. sovereignty ... of war—could still land the president or cabinet members in prison. ... will be working hand in glove with the United Nations to pass a new 'UN Small Arms Treaty. ... America should get out of the UN, since we pay the ...


"We realize that much of our land has already been consigned, turned over to the United Nations: Rivers, national parks, wetlands, Biosphere reserves, Heritages such as Yellowstone National Park, Grand Canyon, Independence Hall, etc., and dozens of other national treasures. Do we have enough other federal land and sites left to cover for all we are borrowing and spending hand over fist? Or will these huge loans also depend upon our privately owned land? "

Our federal government 'deems' vast stretches of private property as 'federal land', then puts it's resources off limits, gives the UN control or uses that land as collateral for US massive foreign debts that cannot possibly be repaid...

It's happening around the world:


"Affair has exposed a much deeper agenda involving the Chinese. They have a military presence on our soil at the inland ports. Their troops train in Mexico and Canada, and soon we will see Chinese troops in these newly designated Solar Energy Zones. Is the presence of the Solar Energy Zones next to a major American military base, referenced in the two previous articles, a case of blending the Chinese military with the American military? Or, is it a precursor to invasion? Flip a coin. Either way, the Chinese call for tighter gun control in America and their presence on American soil, is a major cause for concern that these two events are not merely a coincidence and the Chinese will spearhead a gun confiscation effort inside of the US."

Many Military Convoys Now Moving Through the United States:

(and this is not American equipment)
http://youtu.be/ugMmyBUKRy4


The Chinese Are Here to Confiscate Our Guns
April 15, 2014 - Dave Hodges
The Common Sense Show

In Part three of this series on the Bundy affair and what it reveals about the intentions of the Chines military, we look at the fact that the Chinese Solar Energy Zones are located adjacent to an American military base. We examine the ramifications for this placement and the reader can rest assured that this is no coincidence.

Bundy Achieves Victory but the Event Reveals a Sinister Agenda

As thousands of sheriffs, militia members and state legislators rushed to the aid of Cliven Bundy, plans are already in place to limit any citizen uprising. We know that the feds recorded license plates and engaged in facial recognition of the people on the scene who were actively supporting Cliven Bundy. This is a very disturbing development when one considers that Obama has been proposing preventative and prolonged detention (i.e. pre-crime) for people who “might” pose a future threat. This is the justification for the usage of FEMA camps.