Federal Fire Power: Instead of putting a lien on the property of Nevada rancher Cliven Bundy, the Bureau of Land Management surrounded his ranch with 200 armed agents. It's not the only agency with a private army.

Back in 2008, candidate Barack Obama slipped a little-noticed line in a speech, proposing a national police force reporting straight to him.

"We cannot continue to rely only on our military," he said. "We've got to have a civilian national security force that's just as powerful, just as strong, just as well-funded." 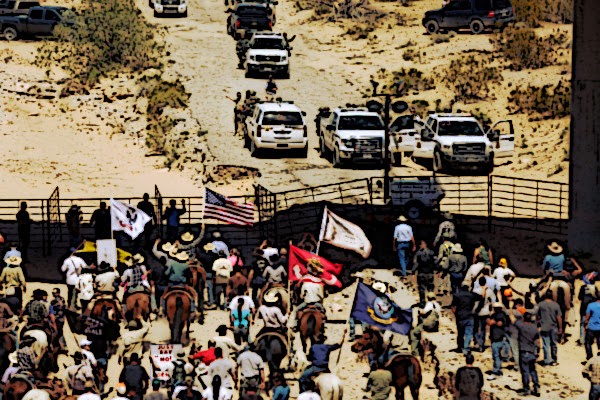 As our military is slowly decimated by his policies and budget cuts — and with federal agencies armed to the teeth — we may be seeing what he had in mind at the ranch of a 67-year-old Nevadan.

Agents of a federal agency that many Americans were surprised to see so heavily armed even herded American citizens into "First Amendment zones," another surprise to those who thought the Constitution made the entire U.S. such a zone.

"The government's option," said Fox News contributor and former Judge Andrew Napolitano, "is to take the amount of money (Bundy) owes them and docket it — that is, file the lien on his property. The federal government could have done that.

"Instead, they wanted this show of force. They swooped in . . . with assault rifles aimed and ready and stole this guy's property, they stole his cattle. They didn't have the right to do that. That's theft, and they should have been arrested by state officials."

In groups of four to eight, they even wore body armor and carried guns while investigating a supposed violation of Section 404 of the Clean Water Act.

That raid drew attention to the fact that some federal agencies, including the Library of Congress and the Federal Reserve Board, have divisions employing armed officers.

Other federal agencies participating in the operation were the Fish and Wildlife Service, Coast Guard, National Oceanic and Atmospheric Administration, Park Service and, yes, Bureau of Land Management.

That's right: NOAA, whose dangerous job is to forecast the weather, monitor the atmosphere and keep tabs on the oceans and waterways, has its own law enforcement division.

It has a budget of $65 million and consists of 191 employees, including 96 special agents and 28 enforcement officers who carry weapons. Why does a weather service need ammunition?

We have pointed out the massive purchase of ammunition by the Department of Homeland Security that's estimated to provide DHS a thousand more rounds per agent than soldiers in the Army.

But DHS is not alone.

Some 70 federal agencies, including those not associated with national security or crime fighting, employ about 120,000 full-time officers authorized to carry guns and make arrests, according to a June 2012 Justice Department report.

The Agriculture Department recently put in a request for 320,000 rounds.

"We're seeing a highly unusual amount of ammunition being bought by the federal agencies over a fairly short period of time," said Alan Gottlieb, chairman of the Washington-based Citizens Committee for the Right to Keep & Bear Arms. "To be honest, I don't understand why the federal government is buying so much at this time."

Maybe we can ask Cliven Bundy.

It's been clear to most of us since this asshole first showed his face.

The hard part is getting the 'drones' in our country to stop watching something other than CNN and see exactly what is going on.

Oh, that notion is something else. Wait until this assclown finds out just how big the real civilian national security force is, and how disinterested it is in supporting him and his. His force is paid, and very small, poorly trained, with nothing but a pay check and ego in the game. The rest of us have our whole lives, families, and businesses, in the game. We train ourselves much better than they can afford to train. And we are willing to lose or take whatever is necessary.

Been here before. Only 3% of the population fought in the Revolutionary war. Only 30% were even against the king, though another 30% waved whatever flag suited the army closest to them. My guess is it will be much higher, this time, push come to shove.

The reason they are reducing the military is because they think civil forces will be all that is necessary, and they can't count on the military in this matter. As I see it, even with corrupted top level C&C, the military, most sheriffs, and some police, are force multipliers, not enemies. We'll see.

Bet they are rushing the development of the Federal Robotic Police, Ground Element.
Gearing up the factories in Old Detroit, starving the military of equipment, training and benefits to fund the Monitors. Armed and armored and ready to defend Barrys status quo.

Yeah, a fantasy, but if he could, he would.

No surprise to any readers of this blog.

The takeaway for others: believe people when they say negative things about themselves.