The following is the personal account of a female Los Angeles attorney who drove Bunkersville, Nevada, to support besieged rancher Cliven Bundy

I rolled into Laughlin really early, like 5:30 am. So many people had shown up, that we decided to leave in groups. A second group to leave at 8 AM as scheduled. Ours was a big group too. About two dozen cars, loaded with passengers.

The highway was almost empty until near Mesquite. Then it was a traffic jam. Motor homes, campers, ATVs running along side the freeway, motorcyles, vehicles, every thing you could possibly imagine. Everyone on their way to Bunkersville. 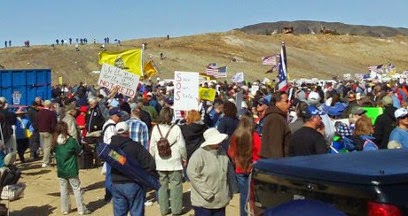 Then it [the traffic] about stopped, just inching along.

Word traveled down the traffic line that the feds had blocked the road just out of Mesquite and were searching vehicles for weapons and cell phones. Cell phones were confiscated and smashed. The people were given a chit for $30.00 redemption value. I left my phone at home.

Some of us that had four wheel drives decided to just leave the road and head overland. As we got closer to the ridge, we were stopped by armed militia. We could not go any further. We could wait, or turn around and go back to the road. Men, who I suspect were special forces, had climbed the ridge from the back side and captured the snipers. They were at that moment coming down the ridge to take them to Mesquite where they would be let go. They weren’t prisoners, they were just going to be replaced by friendlies.

Because of the roadblock on I-15, people refused to be searched, and refused to turn back. They just pulled off the road and parked. It was like a dam backing up a river. Soon the feds were trapped between the Americans who had already gotten through, and the Americans who had been stopped on the highway. The BLM agents went into full panic mode and called for help. LVPD [Las Vegas Police Department] who had REFUSED to show up to help Americans HAD to show up to rescue BLM that was now trapped and helpless. The blockade was SEVEN MILES LONG! That’s a potload of people.

The People vs. BLM

A group of armed Americans along with local cowboys went to Mesquite to liberate the cows that had been confiscated and held by BLM. They were being driven back home in an old fashioned cattle drive. The feds say it was voluntary [that they voluntarily returned the confiscated cattle to Bundy], don’t believe it.

I was basically standing around twiddling my thumbs when the word came down that the Director of BLM had surrendered and all forces would be withdrawn. I could not go on. The road was blocked and would be blocked probably for the rest of the day at least. A bunch of us turned around and left. It was over.

There were THOUSANDS of people there, and more arriving every minute. The ranch, Gold Butte, the entire area was completely surrounded by Americans. The highway was completely blocked in both directions of people trying to get through. Everyone was very peaceful and friendly. No fights or anything. There was a rumor in the line, that some of the mercenaries hired by the feds had defected and were now on the side of the Americans.

I came back and immediately saw this [the media's] pack of lies and half truths.

At one point, I-15 was closed in both directions, about seven miles south of Mesquite, because protesters had blocked the freeway. Nearly two dozen police officers and a SWAT unit were at the scene to keep the peace and assist the BLM enforcement officers to safely leave the area. They were scared crapless!

A perfect example of why Americans MUST keep their guns and why the Government wants to take them!

I couldn't tell who was who in this paragraph:

"As we got closer to the ridge, we were stopped by armed militia. We could not go any further. We could wait, or turn around and go back to the road. Men, who I suspect were special forces, had climbed the ridge from the back side and captured the snipers. They were at that moment coming down the ridge to take them to Mesquite where they would be let go. They weren’t prisoners, they were just going to be replaced by friendlies."

A government "land management" agency that has a big enough budget that it can afford its own sniper and SWAT teams, and can afford to spend more rounding up cattle than just to make a generous market-priced offer for them is an agency that has waaay more money than it needs to carry out its core duties.

A government that can create its own money does not have to ask taxpayers for permission to spend more to feed its self-serving bureaucratic activities. When states start calling for a Convention to consider amendments to the Constitution, the first topic must be to restrain federal spending. A government that must live within its means is a government that must focus on the important things rather than imposing evermore intrusive laws and regulations having the weight of law.

An update to the upcoming raid on all the Bundy's homes by the feds:
As Sheriff Mack reported the feds returning on a future date to raid Bundy's home - Doug Hagmann was able to get some more insider info from DHS:
The feds plan on raiding all Bundy homes (children included)on or around 16 May 2014 - the day that Col. Riley planned the American Spring march on DC. The feds figure that americans are so busy focusing on that march that they won't pay attention any longer to Bundy and his cattle grazing.
He also said that more insider info is forthcoming but, americans need to remain vigilant.

As Harry Reid and, his crooked son Cory stated Bundy won't get away with breaking the laws.
It isquite rich coming from some of the biggest crooks in the progressive party.
There is also a George Soros connection!

I find it interesting that the minor coverage given to this, by the lame stream media showed carefully blocked shots of small groups of people to make it appear that there weren't many people there and the only person they chose to interview was a man who looked like had had a stroke so was "not camera friendly" they were looking for the weirdest looking person there. unfortunately for them, he was well spoken and articulate. they must have HATED that. aholes!.

I cannot verify much of this account,but I was there on the front lines of the showdown standing with the cowboys under the bridge. Traffic on the the I 15 was stopped for a while to allow BLM vehicles to leave the area. There were a total of about a thousand people at the ranch in the morning and about 600 at the bridge and wash in the afternoon. The BLM agents were nervous but their special forces spokesman was calm and cool as he negotiated with the Bundy boys. Credit to him as he de-escalated the situation. An FBI? helicopter circled for 2 hours while we waited for the cattle, they had the side door open and were most likely taking video and pictures. Overall it was a good day for liberty and the second amendment.

This "account" is BS. Makes for a great story but it can't be verified and folks that were there are denying it. There weren't "thousands" of armed Americans...only about 1,500 with SOME being armed. No snipers were captured at all; total fabrication on that, too.

Honestly, this entire event stands on its own merits and is a great testament to the fact the American patriotism is on the rise. Why embellish?