Reagan and Levin drop science on Rand Paul, Mike Shedlock, and the rest of the isolationist war-mongers

I respect and often link to Mike Shedlock's Global Economic Analysis site for his take on macroeconomics. His opinions are usually sound and his reasoning and research solid.


On Thursday, April 17th, Mark Levin tore the isolationist-Code Pink-McGovern libertarians a new orifice using a Ronald Reagan speech as an exclamation point. You can listen to it here (MP3 - courtesy of The Mark Levin Show Podcast Downloader Widget).
But when he veers into national defense and international diplomacy, he makes a complete fool of himself. He advocates the Ron Paul/George McGovern strategy of appeasment and weakness, which history tells us is far more dangerous than the alternative.

Today we are witnessing a slow-motion replay of the 1930s with Russia's annexation activities. Putin's actions are bringing instability, fear and trepidation to all of Europe. 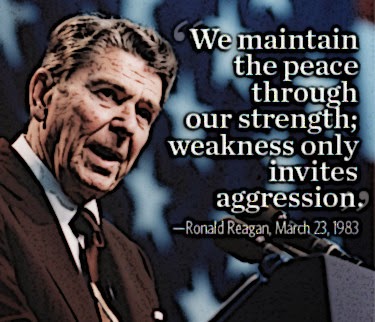 And why are we seeing Putin act so aggressively? Because he knows Obama is all bluster and no stick. He sees Obama unilaterally disarming the U.S. military -- eviscerating advanced fighter systems, dismantling nuclear weapons, killing the Tomahawk missile program, to name but a few -- and knows that the president's core belief is that America must be weak.

After all, America is an imperialist war-monger in the view of Obama, Shedlock, Paul, and the other nuts.

A strong national defense? It's for us. It's to ensure that no one dare pick a fight with the United States or its allies. It there to prevent conflict.

That's how Reagan won the Cold War without firing a shot.

And today we are witnessing all of those gains vanish as the most destructive president in American history orchestrates the rise of a nuclear Iran, a Middle East afire, Red China laying claim to ever-increasing swaths of the Pacific, and Russia creeping ever westward into Europe.

It is the isolationist, Code Pink libertarians that are the war-mongers.

Obama, Shedlock, Paul and their ilk are the war-mongers. They must ignore all of human history to arrive at their bizarre ideology; it is certain that their ignorance will get a lot of people killed.

Rand Paul has advocated taking almost identical action in Ukraine as every other Republican. He advocates increasing the defense budget. The budget he submitted last year actually restored the sequester cuts. He is for maintaining military bases throughout the world.

Equating Ron Paul and Rand Paul as identical is dishonest. They are directionally similar but there are major, major differences that make one a reasonable choice and one an unreasonable choice.

Rand Paul has advocated taking almost identical action in Ukraine as every other Republican. He advocates increasing the defense budget. The budget he submitted last year actually restored the sequester cuts. He is for maintaining military bases throughout the world.

Equating Ron Paul and Rand Paul as identical is dishonest. They are directionally similar but there are major, major differences that make one a reasonable choice and one an unreasonable choice.

"Statements like this," Doug? Senator Paul is being a realist. He knows there's absolutely no chance that the nation will accept American involvement in yet another Middle East war, even with A Republican Senate majority and a Republican president in the White House. If that's the case -- and I agree with Senator Paul that it is -- then a non-invasion option must be considered. Economic sanctions may prove to be insufficient, no matter how harsh. So containment, in the sense of a ring of states and bases vigilantly ready to counteract any aggressive move by the mad mullahs, is something to be considered seriously.

Is a containment strategy the best of all possible outcomes? Of course not. But if we assume that an invasion and the decapitation of the ruling Iranian regime is not politically possible, then it might just be the best of the options remaining.

anyPeople are war weary after Iraq/Afghanistan. It meant nothing...all the deaths, costs, altered lives. Sending troops into Poland, getting involved even via NATO is not resolve nor in our interests. Frankly, let NATO sans the U.S. fend for itself for once...aged continent or not. I agree sometimes R.P. or a Buchanan are a bit off kilter, but this old hawk is tired of sacrificing our youth's blood. Not one boy died in the Middle East to make me safer...judging by the activity of CAIR within our borders now.

Who's ever advocated an invasion?

The Islamonazis have stated categorically that (a) they are at war with us; (b) they intend to develop nuclear weapons; and (c) they will use them to destroy the U.S. and Israel -- the Satan brothers.

I wouldn't hesitate to level those bastards.

Not a foot on the ground needed.

Our Global Corporate Mercenary Forces must be kept strong to make the world safe for Transnational Corporations.

There is a narcissistic tendency in American foreign policy. Everything is about us and everyone else will perceive our actions in the same way we do. That's not strategy, it's navel gazing.

Putin is pushing back against the Western attempt to draw the states of the former Soviet Union into the European political/economic system (EU/NATO). Russian history makes his actions completely understandable and not nearly as ominous as you would suggest.

Does that mean it's a good thing for Ukraine? Of course not. Ukraine is in the unenviable position of being the new Poland: stuck in the middle between two powers contesting for influence and control. The mistake we made in the 90s and 2000s was to make the Ukrainians believe that wasn't the case.

Russia has legitimate security interests (to say nothing of cultural ones) in Ukraine. In a world where American foreign policy makers actually thought before they took action, we would never have even suggested that Ukraine might be admitted to NATO or the EU. Instead, we would have made abundantly clear that our only interests were in the territorial integrity of Ukraine and the maintenance of a free society. In foreign policy it would be Finlandized to use the Cold War term. Because we did not define limited, attainable goals we now find ourselves in the current situation.

I'm no fan of Obama, but if you want to see who is responsible (to the extent any American president is) for all of this, you need to look at Bill Clinton and George W. Bush.