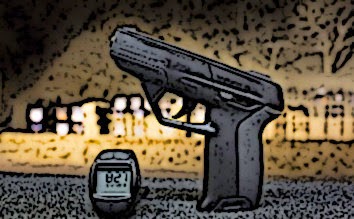 Apparently, Holder didn't think anyone would read his written submission, because he all-but-admitted that Obama intends to implement a Universal Gun Registry by executive fiat.

He also asked Congress to help fund so-called “smart gun” technology, which would prevent a gun from firing unless the shooter is wearing an accompanying bracelet or ring.

“Smart guns” are a dumb idea

Given that “smart gun” technology only works about 80 percent of the time -- according to the New Jersey Institute of Technology -- gun owners almost universally consider this a “dumb” idea.

Even police have rejected the “dumb gun” approach for themselves.

Currently, there are no such guns on the market in the United States. One gun store did briefly offer an Armatix .22 caliber earlier this year, but public outrage forced them to pull the handgun from the shelves.

This year’s Obama budget shows how the administration is trying to quietly create the infrastructure for a universal gun registry.

In proposed “Program Increases” for the FBI, Holder has this to say:

“This program enhancement will double the capacity of the existing NICS [National Instant Check System] system. These expansions are vital in ensuring that the NICS system can support a Universal Background Check requirement, which is expected to double gross NICS transactions.”

It may have escaped the Attorney General's notice, but the Democrat Senate defeated his Universal Background Check requirement.

So, in effect, Holder's asking for $100 million and 524 personnel to implement a program Congress rejected.

In the section on ATF “Program Increases,” Holder demands $51.1 million and 255 agents and other personnel for enforcement and inspections.

In case anyone has forgotten, these are the people who are going to the FFL's in connection with “annual inspections” -- and physically copying all the 4473's and bound book entries. GOA has reported on these efforts before, and one can read first-hand accounts from gun dealers here and here.

So under Holder's proposed budget, many more 4473's would be copied and fed into ATF's de facto registry.

At the same time, Obama's illegal Universal Background Check -- implemented, presumably, by executive fiat -- would ensure every gun transaction would have to go through an FFL. And this, of course, would guarantee that every American gun owner would have a 4473 which can be copied.

Think about it. With Republicans expected to take the Senate this fall -- and Obama stymied legislatively -- he has every incentive to go "full tyrant." And that, apparently, is exactly what he intends to do.

But we have no intention to sit back and let Holder take away our Second Amendment rights. We have drafted legislation to prohibit ATF from copying 4473's -- and to require it to destroy any 4473's it currently has.

UPDATE: GOA recently alerted you that an import ban on certain ammunition could be forthcoming from the ATF. Well, it’s official now -- the ATF just declared that Russian-made 7N6 5.45x39 ammo is armor piercing. This lawlessness represents another reason that Congress needs to cut the ATF’s budget.

ACTION: Contact your Representative. Demand that the Commerce-Justice-Science appropriations bill contain language to prohibit ATF from compiling a national gun registry by copying and retaining the 4473's of every American.

These are the last, failed policies of a doomed Presidency. As rats and vermin are sucked under by a sinking ship they are filled with madness, irrational behavior, and a willingness to strike at anyone they think is a threat. It is a manifestation of mental illness from which the American people must divest themselves. Obama is a curse, freedom is the cure.