But that's just a guess about her next career move.

Just for fun, let's examine how the DNC public relations flacks at The New York Times put it: 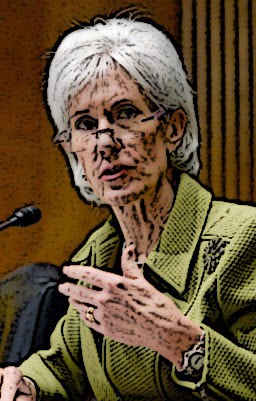 Mr. Obama accepted Ms. Sebelius’s resignation this week, and on Friday morning he will nominate Sylvia Mathews Burwell, the director of the Office of Management and Budget, to replace her, officials said.

The departure comes as the Obama administration tries to move beyond its early stumbles in carrying out the law, persuade a still-skeptical public of its lasting benefits, and help Democratic incumbents, who face blistering attack ads after supporting the legislation, survive the midterm elections this fall.

Officials said Ms. Sebelius, 65, made the decision to resign and was not forced out. But the frustration at the White House over her performance had become increasingly clear, as administration aides worried that the crippling problems at HealthCare.gov, the website set up to enroll Americans in insurance exchanges, would result in lasting damage to the president’s legacy.

Ouch. That's the Times, mind you.

Sebelius is just the latest political victim of the Obamacare debacle. She won't be the last.

I think it is foolish to believe she won't pop up in another, better position. Barry takes care of his own, she wore the kneepads well and showed she could still get her ankles around her neck, she'll be back.