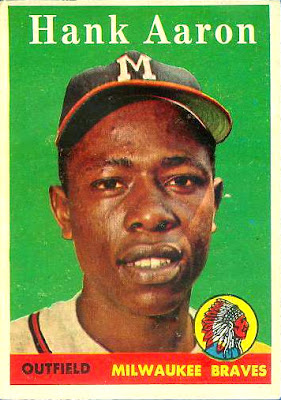 Lots going on today, most of it sucks. Most of it involves the government, most of it involves malcontents and miscreants. But one thing you've probably heard about today, and I was stunned by this, frankly, was Hank Aaron. I have a valuable Hank Aaron card. I collect valuable baseball cards. I've got some Babe Ruth cards, some Ty Cobb cards, I've got, oh I can't remember them all. But some really good stuff. And I've got a great Hank Aaron card, and I'll be getting rid of that at the next sports card event. Because I want nothing to do with this man going forward. He's disgraced himself. And here in the Washington Times, citing the USA Today piece, "Baseball legend Hank Aaron, 80, acknowledged race relations have changed since his threat-filled days chasing Babe Ruth’s home run record — but said modern tormentors still exist wearing suits and ties instead of KKK hoods."

“We can talk about baseball. Talk about politics. Sure this country has a black president, but when you look at a black president, President Obama is left with his foot stuck in the mud from all of the Republicans with the way he’s treated,” he told USA Today.
So, you see: All Republicans treat Obama this way, all Republicans who oppose Obama, oppose him because they're racists. That's the only logical conclusion you could draw from an ignorant statement like this. So half the country, or half or some large percentage of the country, who doesn't agree with Obama on the issues, that wants to see Obamacare repealed, that is extremely troubled with how this guy's running up the debt on their children and grandchildren, that wants the border secured so their communities can be safe and economically viable, that wants a rational foreign policy, you're all racists, according to Hank Aaron...

I guess those of us who disagree with you and disagree with Obama, or disagree with leftists anywhere, well, we're the new Klansmen you see. Just because we wear ties and starched shirts -- neither which I wear often, by the way. We're just like the Klan. This is a disgrace, this man has disgraced himself. As I said, I don't care how many homeruns he hit, I don't care what his name is, and I'm going to get rid of that card as fast as I can because I don't want it anywhere in my house. Awful.

I want to give Mr. Aaron the benefit of the doubt because what he went thru was very real, indeed. However difficult that time in is life was, I can't excuse his seeming disregard of who the real racists are. I could excuse him for being an old man, who might be suffering from dementia. But sadly, he has a history of making ignorant statements regarding race relations in America.

It just goes to show you that just because someone may be a great ball player, that does not mean they are a great person.