What would Reagan do with a punk like Putin?

Russian Aggression: Instead of a foreign policy that's a blend of Neville Chamberlain and Monty Python, the U.S. should trade flexibility for some backbone, scrap the reset button and start digging some missile silos. 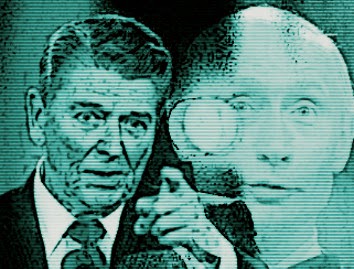 It takes a lot to make Jimmy Carter look like Winston Churchill. But President Obama, who bats not an eye as a Russian warplane buzzes a U.S. warship in the Black Sea, has accomplished that with his pusillanimous policy regarding Moscow's creeping anschluss in Ukraine.

Former Defense Secretary Donald Rumsfeld's comparison of current events to the days before World War II is on the mark. On Saturday, March 7, 1936, Hitler ordered three battalions of the German army to cross the Rhine bridges into an area of Germany demilitarized by the Treaty of Versailles that ended World War I.

The British and French, fearing war, did nothing. The rest, as they say, is history.

Crimea was Putin's Rhineland, and the sanctions involving travel restrictions on low-level oligarchs was laughable. Tyrants do not move swiftly. They test the waters. They nibble. They watch. Weakness and inaction only delay the inevitable.

When Soviet General Secretary Mikhail Gorbachev met Ronald Reagan in Reykjavik, Iceland, in October 1986, he hoped the U.S. president would be willing to trade his Strategic Defense Initiative (SDI) away in exchange for arms-control agreements and vague promises of making nice with America.

Reagan refused to negotiate the SDI away. He opposed the proposed nuclear freeze and put Pershing missiles in Europe to counter the Soviet SS-20s that were targeted on Western Europe. He put America's security in the hands of American technology, not the goodwill of its enemies.

Within hours of the election of Barack Obama, Russian President Dmitry Medvedev announced that Moscow would deploy SS-26 Iskander missiles in the Russian enclave of Kaliningrad situated between our NATO allies Poland and Lithuania. He wanted the U.S. to abandon plans to deploy missile interceptors in Poland and warning radars in the Czech Republic designed to counter a future threat from Iran.

Unlike President Reagan, Obama meekly complied and notified the Poles in a midnight phone call on Sept. 17, 2009 — the 70th anniversary of the Soviet Union's invasion of Poland — that we were pulling the plug on that system due to Russian objections.

Putin, getting ready to resume the Russian presidency and his plans to reassemble the old Soviet Union, took note. The U.S. under Obama would not resist Moscow's ambitions.

Putin watched on 2012 as Obama promised Medvedev at the Nuclear Security Summit in Seoul, South Korea, that after his re-election he would have more "flexibility" to weaken missile defense, which would help him fulfill his dream of U.S. disarmament.

Speaking last Wednesday in Berlin not far from where President Obama once expressed his dream of a world without nuclear weapons, Indiana Gov. Mike Pence noted the obvious: that the Obama administration's policy of "conciliatory diplomacy" toward Russia has failed and suggested an appropriate response to Putin.

"With continued instability in the Middle East, and Putin's aggression in Ukraine," Pence said, "I believe we must take immediate steps to strengthen our mutual security by deploying a robust missile defense in all of Europe — including Poland and the Czech Republic — to protect the interests of our NATO allies and the United States in the region."

Coupled with an announcement that we would complete the Keystone XL pipeline and remove all drilling and energy export restrictions, it would be more than enough to make Putin, the old KGB colonel, pause.

Such strikes on the source of Putin's economic strength and strategic ambitions would amount to real consequences for his actions.

Unfortunately today we are not the same Americans who elected Reagan. We are the people who feel Obama represents American virtues. Sloth, greed, envy, hatred, and the infant god.

We are in deep trouble. And don't blame Obama, blame those creatures who walk among us who love the Kenyan slug.

It's hard to tell who is a good guy in this situation.

I have a few questions:

Didn't I read that Ukraine has been taking aid money from Russia to bolster its economy since it became 'independent'?

Do half the people of Ukraine want to revert back to Russia?

Is Ukraine the victim of US/EU meddling by foisting a coup on the Ukrainian people?

Are there Neo-nazis and Islamists involved in this mix opposing those who want to revert to Russia? (It looks like Islamists and neo-Nazi/socialists/fascists are taking over Europe too)

It's a bit fuzzy. If I were an Ukrainian, I'm not sure which of the Hobson's choice I would choose: Euro-Obama-socialist-Islamist or Putinesque Russian.

I'm not sure why or if most of grass-roots conservative America refuses to vote, but the stats say they don't.

Either that or the combination of Obama-multi-voters, Chicago-Democrat voter fraud and Soros Voting machines has over-powered the system and created a corrupted voting system.

Half of America certainly are dependent on the tax dollar for either a salary or a welfare check/food stamps/housing.