ELIJAH CUMMINGS CAUGHT IN A CIRCLE OF CORRUPTION: Who Will Oversee the Overseers?

Corruption: New IRS emails released by a congressional panel show staff working for the Democratic ranking member communicated with the IRS multiple times in 2012 and 2013 about a voter-fraud prevention group.

Rep. Elijah Cummings, D-Md., said on CNN's "State of the Union" last year, "Based upon everything I've seen, the case is solved. And if it were me, I would wrap this case up and move on, to be frank with you."

Of course he wanted to move on, for he had been working hand in glove with the IRS to target conservative groups and wanted the fact to remain a secret. 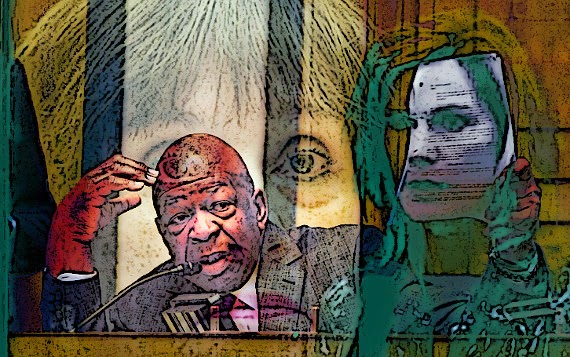 On Feb. 6, in a subcommittee hearing that heard the testimony of Catherine Engelbrecht — founder of True the Vote, who was targeted by the IRS, FBI and other federal agencies — Cummings vehemently denied having any contact or coordination in targeting True the Vote.

Responding, attorney Cleta Mitchell, who is representing True the Vote, indicated that staff on the committee had been involved in communication with the IRS. In short, Cummings was not telling the truth.

After the hearing, Engelbrecht filed a formal ethics complaint accusing the Maryland Democrat of trying to intimidate her by causing the targeting.

Cummings on three separate occasions had sent letters with his title on the House Oversight and Government Reform Committee stating that he had concerns and that True the Vote should be investigated.

Emails released by House Oversight Committee Chairman Darrell Issa, a California Republican, show that Cummings' Democratic staff had requested information from the IRS' tax-exempt division, the one headed by Lois Lerner, on True the Vote, a conservative group that monitors polling places for voter fraud and supports the use of voter IDs, something Cummings opposes. "The IRS and the Oversight Minority made numerous requests for virtually identical information from True the Vote, raising concerns that the IRS improperly shared protected taxpayer information with Rep. Cummings' staff," the Oversight panel said in a statement.

According to Issa, Cummings and his staff sought "copies of all training materials used for volunteers, affiliates or other entities" from True the Vote.

Five days later, the group received an almost identical request from the IRS for (1) "a copy of (True the Vote's) volunteer registration form," (2) "the process you use to assign volunteers," (3) "how you keep your volunteers in teams" and (4) "how your volunteers are deployed ... following the training they receive by you."

As Townhall.com reports, the first contact between the IRS and Cummings' staffers about True the Vote happened in August 2012.

On Jan. 25, 2013, Cummings' staff asked for more information from the IRS about the group.

Three days after that, Lerner wrote an email to her deputy, Holly Paz, asking, "Did we find anything?"

Paz responded by saying not yet, to which Lerner replied, "Thanks, check tomorrow please."

"Although you have previously denied that your staff made inquiries to the IRS about conservative organization True the Vote that may have led to additional agency scrutiny, communication records between your staff and IRS officials — which you did not disclose to majority members or staff — indicates otherwise," states a letter to Cummings from Issa and five other subcommittee chairmen.

After Engelbrecht formed her group and sought tax-exempt status, she and her family, which previously had no contact with any government agency of any kind, were buried by an alphabet soup of government harassers, including the ATF, OSHA and the IRS that Cummings was coordinating with.

"This is what the beginning of tyranny looks like," Engelbrecht told Breitbart.com.

Indeed it is. Elijah Cummings has a lot of explaining to do.

If there were any sanity left in this country- I said "if."

Then this conman- or is hustler the correct term? He's a crook by whatever name he goes, would be given an indictment; followed by a fair trial; and then a long period to reflect upon his many sins whilst incarcerated in some Federal prison.

Too bad there's no sanity.

Why was Issa tried, convicted, and humiliated for simply turning off Cummings' microphone. Yet being caught as a co-conspirator and a liar, Cummings remains smugly silent with the House ethic committee ignoring him. Is this an example of the new rules... I have two kids, one white & one black, they are caught with cake on their face eaten without permission. Apparently, now I can only punish the white child because any action against the black child is considered racist. The black child becomes entitled and knows no consequences for his actions.

I don't expect to find a Democrat left in Congress that has any integrity left or a moral compass. One of the main reasons I left the Democratic Party. There are very few honest career politicians left on the Republican side. Cummings is so typical of his party now. How sad.