BUT THEY'RE LOOKING OUT FOR WOMEN, DONTCHA KNOW: Food Stamp Recipients Outnumber Women with Jobs

Any honest accounting of the employment situation in America wouldn't focus on "equal pay".

Instead, it would deal with twin scourges of the Obamaconomy: unemployment and welfare.

People participating in the food stamp program outnumbered the women who worked full-time, year-round in the United States in 2012, according to data from the Department of Agriculture and the Census Bureau.

In the average month of 2012, according to the Department of Agriculture, there were 46,609,000 people participating in the food stamp program (formally known as the Supplemental Nutrition Assistance Program). That contrasts with the 44,059,000 women who worked full-time, year-round in 2012, according to the Census Bureau’s report on Income, Poverty and Health Insurance Coverage in the United States. 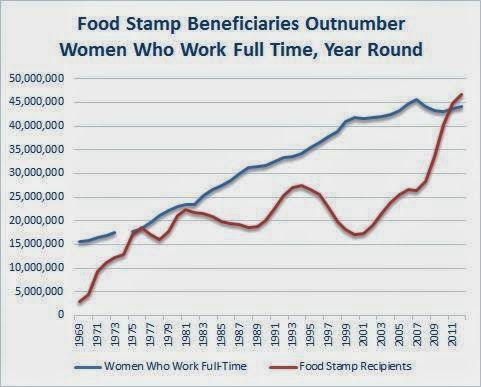 In other words this phenomenon hasn't occurred since 1976 and yet it has occurred twice in a row with Barack Obama as president. And he's going for the trifecta.

As Mark Levin is fond of saying, the welfare state is both expanding and collapsing at the same time.

The chart above illustrates the conundrum we face unless Democrats are forcibly booted from office in November.