That should have been the New York Times headline for today's article about how the major IT employers have been sued "on claims of conspiring to keep their employees down".

Instead, the Times headline predicted the outcome of a class action suit by U.S. workers against Google, Apple, Intel, and Adobe with these words: "In Silicon Valley Thriller, a Settlement May Preclude the Finale". 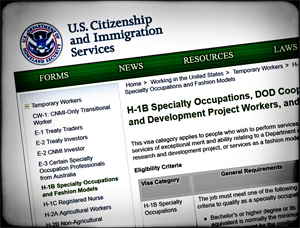 The story was about a case brought against the big firms by 64,613 (presumably mostly citizen) software engineers for, again to quote the paper, "agreeing not to solicit one another's employees in a scheme developed and enforced by [the late] Steven P. Jobs of Apple."

The software giants, which trumpet the sacredness of markets in other arenas, apparently do not like to deal with the forces of a free labor market, in which there is open bidding for the most talented workers.

This should not be news to immigration watchers, as the firms have long used the H-1B program to keep wages down and to discourage competitive bidding for the services of the usually Indian or Chinese software programmers. But this time those tactics, the plaintiffs say, are being used on American workers.

The H-1B program, however, needs no big-company conspiracy as immigration law already discourages the indentured H-1Bs from moving from employer to employer. H-1B workers have nominal freedom to move from job to job, but the green card complication quietly discourages such moves. If an alien worker has an H-1B job and his employer has either promised a green card petition or actually filed for one, that worker is highly unlikely to jump ship since a new employer would have to start the time-consuming green card process all over again.

The similarity of the Steve Jobs conspiracy to the operations of the H-1B program was not mentioned by the Times as the paper routinely under-reports the downsides of immigration matters.

The article mentions how the firms and their lawyers are trying to secure a settlement of the class action suit. Any such settlement would feature massive fees to the class action lawyers (who are paid for their services only if they win or settle) and billions for the class members collectively.

While the financial costs to the big employers would be high — maybe as much as $3 billion — such a settlement would avoid weeks or months of bad PR as various claims of collusion, fortified by in-house emails, would embarrass the firms. Any such settlement would get the matter out of the public eye.

In somewhat similar, if lower-key situations, as our blogs have pointed out in the past, big H-1B users like Infosys have settled wronged-employee suits out of court for unknown, but presumably major sums, buying silence in the process.

Very well said. These tips are really amazing. I appreciate it for sharing them. If we are not currently covering your PLC then please feel free to contacts us at info@directorstalk.com with your details.
Aim financial news , AIM Mining news , AIM Small cap shares .

I could have sworn the article was about the H1-B abuse by the Silicon Valley Software Industry, not "my PLC".... In any case, aren't these the same companies financially supporting universal amnesty and to hell with the country that provided the business environment that enabled them to succeed? Just wondered....