One word other than DUDE comes to mind. Picture Keanu Reeves saying, "Whoa."

It’s truly a “eureka” moment for Kepler scientists: the first rocky Earth-sized world has been found in a star’s habitable “Goldilocks” zone, the narrow belt where liquid water could readily exist on a planet’s surface without freezing solid or boiling away. And while it’s much too soon to tell if this really is a “twin Earth,” we can now be fairly confident that they do in fact exist.

The newly-confirmed extrasolar planet has been dubbed Kepler-186f. It is the fifth and outermost planet discovered orbiting the red dwarf star Kepler-186, located 490 light-years away. Kepler-186f completes one orbit around its star every 130 days, just within the outer edge of the system’s habitable zone.

The findings were made public today, April 17, during a teleconference hosted by NASA. 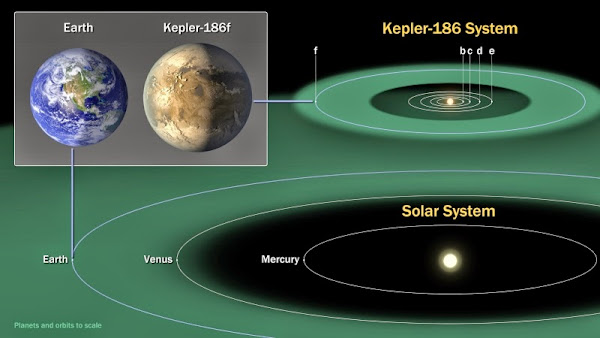 “This is the first definitive Earth-sized planet found in the habitable zone around another star,” says lead author Elisa Quintana of the SETI Institute at NASA Ames Research Center. “Finding such planets is a primary goal of the Kepler space telescope. The star is a main-sequence M-dwarf, a very common type. More than 70 percent of the hundreds of billions of stars in our galaxy are M-dwarfs.”

Unlike our Sun, which is a G-type yellow dwarf, M-dwarf stars (aka red dwarfs) are much smaller and dimmer. As a result their habitable zones are much more confined. But, being cooler stars, M-dwarfs have long lifespans, offering planets in their habitable zones — like Kepler-186f — potentially plenty of time to develop favorable conditions for life.

In addition, M-dwarfs are the most abundant stars in our galaxy; 7 out of 10 stars in the Milky Way are M-dwarfs, although most can’t be seen by the naked eye. Finding an Earth-sized planet orbiting one relatively nearby has enormous implications in the hunt for extraterrestrial life.

The ramifications of this discovery are truly awe-inspiring.

at 7:38 PM
Email ThisBlogThis!Share to TwitterShare to FacebookShare to Pinterest
Labels: Scitech

On that other 'earth,' its Obama is a intelligent, and his transvestite wife is elegant.

So maybe it's dark, and has slightly higher gravity, so the inhabitants are more muscular. It's like a Frazetta painting world!

"The ramifications of this discovery are truly awe-inspiring."

Meh. Possibilities don't give me awe. Show that there's life there, and then I'll have some awe. Awe at what, though, is another question.