There's some heavy weather transpiring today, my brothers and sisters, so watch your six.

Mashable offers us an aggregated view of risk based upon location, observing:

A huge swath of the central United States, stretching from Nebraska to northern Louisiana, is on high alert through Sunday night for severe thunderstorms, including the possibility of multiple strong tornadoes, large hail and damaging straight-line winds... forecasters are urging residents in affected states to stay tuned to the latest forecasts, and prepare to take tornado precautions if necessary.

The Storm Prediction Center (SPC), which is the tornado forecasting branch of the National Weather Service, has issued a string of tornado watches, with the greatest risk of long-lasting, strong tornadoes focusing on Arkansas, eastern Oklahoma, northeastern Texas and northern Louisiana... 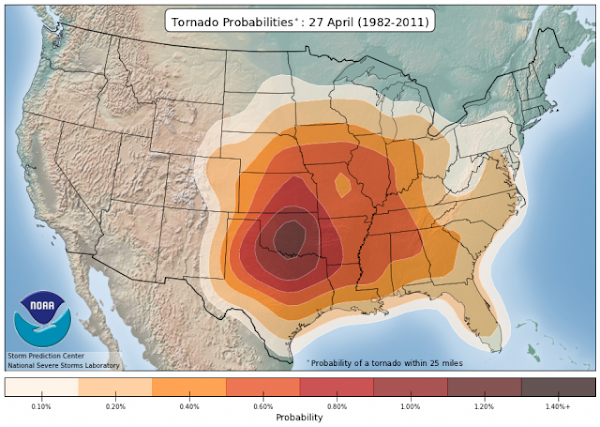 ...To put the risk level into context, there are, on average, only a handful of "High Risk" severe thunderstorm days in the U.S. each year, as this is the peak alert level on the Weather Service's scale. This is the first "High Risk" day in the U.S. in 2014. The last one was in Nov. 2013, and last one in Arkansas was in May 2011...

...While this storm outbreak comes in an unusually quiet season, it is located close to the 30-year average location for the highest tornado risk on April 27, according to data from 1982 to 2010. Some well-known tornadoes have occurred on this day, including the 2011 Tuscaloosa tornado, which was a large EF-4 long-track tornado that killed 64...

You can be sure that the Global Cooling Deniers™ will blame any storm, of any magnitude, on the fact that you're not driving a Nissan Leaf.

But, then again, they drive gas-guzzling Jaguars. Which tells you everything you need to know about the Global Warming Climate Change scam.