The Two Brothers at the Center of the Benghazi Cover-up

The disclosure this week of a White House document on Benghazi has thrust CBS News into the spotlight for its coverage in the aftermath of the terrorist attack. 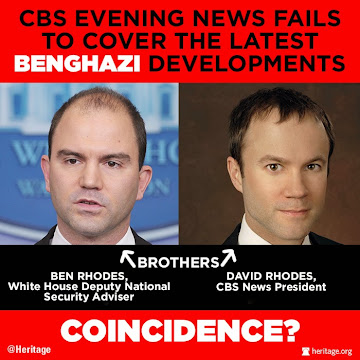 Last night, “CBS Evening News” did not cover the latest developments on the story, even though reporters peppered White House press secretary Jay Carney with questions earlier in the day.

The Washington Free Beacon reports CBS was the only evening newscast not to cover the latest details on Benghazi. The program instead covered “the weather, Oklahoma executions, and the arrest of a former Irish Republican Army operative.”

Earlier yesterday, Glenn Beck interviewed Sharyl Attkisson, a former CBS News investigative reporter, about the Benghazi disclosure and the Rhodes brothers. Attkisson revealed that she sought the same Ben Rhodes document that Judicial Watch eventually obtained. CBS News, however, would not take the matter to court.

“CBS wasn’t willing to file a [Freedom of Information Act] lawsuit when I was there to try to get some of these documents,” Attkisson said.

She continued: “Of course I knew about the relationship between Ben Rhodes, the assistant to the president, and the president of CBS News. And there had been a little bit of reporting … involving Rhodes and some of the talking point matters, so I wasn’t terribly surprised. But I was glad to see written documentation that sheds a little more light on all of this.”

Attkisson resigned from CBS News in March. Among the reasons cited: a lack of support for her investigative reporting on Benghazi and other Obama administration scandals.

In her coverage of the Rhodes document Tuesday, Attkisson noted the brothers’ relationship. CBS News did as well in a story published on its website yesterday.

“Larger questions deserve to be answered about the atmosphere and culture at CBS News and how open [David] Rhodes is to any investigations into the Benghazi story and his brother’s involvement,” O’Connor wrote for the Free Beacon. He added:

Let’s be clear: this is not an appearance of conflict, it is an actual conflict. Whether that conflict actually affects the way the story is being covered at CBS News is an open question.

It may very well be that David Rhodes has let it be known that his brother is fair game and if a CBS reporter can catch the White House adviser holding a smoking gun they’ll be rewarded not punished. But why should it be a mystery? Why aren’t Rhodes and CBS out in front of this issue? Why aren’t they leading the charge on the Benghazi story to erase any suspicion of a conflict where one clearly exists?

It’s past time for David to address this question head-on and erase any concern in his newsrooms and any question in the minds of CBS News’ dwindling audience. And it’s also time for other journalists in Washington to point out the obvious conflict.

A spokesman for CBS News did not respond to questions as of this story’s publication.

what we have here is tantamount to a soviet propaganda axis:

for his lies about benghazi, obama should be impeached.

all the folks in the news media who collaborated should resign.