To help manage his manufactured refugee crisis on the southern border, President Obama has installed a security force that -- seriously -- refers to themselves as "Brown Shirts". Furthermore, they've threatened doctors and nurses who are treating disease-ridden illegal aliens with imprisonment if they tell the public about what they've seen in the Obama concentration refugee camps.

A government-contracted security force threatened to arrest doctors and nurses if they divulged any information about the contagion threat at a refugee camp housing illegal alien children at Lackland Air Force Base in San Antonio, Texas, sources say. 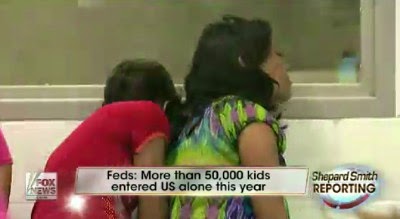 In spite of the threat, several former camp workers broke their confidentiality agreements and shared exclusive details with me about the dangerous conditions at the camp. They said taxpayers deserve to know about the contagious diseases and the risks the children pose to Americans. I have agreed to not to disclose their identities because they fear retaliation and prosecution...

...The sources said workers were guarded by a security force from the BCFS, which the Department of Health and Human Services hired to run the Lackland Camp... The sources say security forces called themselves the “Brown Shirts.”

“It was a very submissive atmosphere,” the counselor said. “Once you stepped onto the grounds, you abided by their laws – the Brown Shirt laws.”

She said the workers were stripped of their cellphones and other communication devices. Anyone caught with a phone was immediately fired... “Everyone was paranoid,” she said. “The children had more rights than the workers." ... She said children in the camp had measles, scabies, chicken pox and strep throat as well as mental and emotional issues.

...A former nurse at the camp told me she was horrified by what she saw... “We have so many kids coming in that there was no way to control all of the sickness – all this stuff coming into the country,” she said.

Not to worry, my friends. Jeb Bush says they're bringing all of these diseases to the United States for noble reasons. So just ignore the outbreaks of contagious, deadly diseases from the Third World.

"To America with Love".

Why didn't you tell us what BFCS stood for, hmmmm? If you find the urge to suppress info that is "uncomfortable" then you are nothing more than MSM in training. Myself, I found that information as disturbing as the story itself.

Are these nurses and physicians so hard up for a job, they allow their rights to be bullied? Confiscation of cell phones and signing non disclosures? Something about this story doesn't add up.