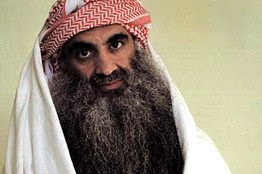 Is anyone else as puzzled as I am by the new stock photo of Khalid Sheikh Mohammed? It could hardly be more different from the hairy chested view of him taken upon his apprehension. 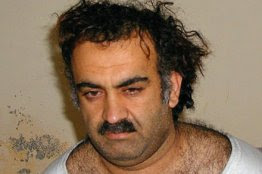 I'm referring to the photo that appeared at the same time that the New York trial was announced, portraying him in traditional Arab dress. The picture is odd in a number of respects. For one thing, it's extraordinarily ambiguous. While KSM appears to be trying to look ferocious, the robes, wide-eyed expression, and cocked head all work to give him a distinctly feminine air. The picture fairly reeks of the homoeroticism that Christopher Hitchens, among others, has detected in the Jihadi subculture.

But the oddest thing of all is this: it's obviously a recent photo. This individual is several years older than the figure in the well-known "crazed pizzeria worker" photo that introduced KSM to the world. So it had to be taken since he was in custody, and it is alleged that the International Red Cross took it.

The question is: why?

Look at what he's wearing. The white headdress, the turban. This is a sheikh's costume. The clothing of a figure of respect in the Arab world. This photo was designed to impress, to portray KSM not as a prisoner, not as a terrorist, but as a man of distinction within the framework of his home culture.

This picture was apparently taken while KSM was in American custody, processed with American acquiescence, and released with American permission. It's exactly as if we were acting as KSM's PR firm, hired to make him look as imposing as possible.

There is no better example of the Obama administration's skewed priorities than this single photo.

KSM admitted -- and it was independently confirmed through multiple sources include Usama Bin Laden -- arranging the murders of some 3,000 American citizens, easily the greatest single act of terrorism in world history.

Men and women going about their business, reading their emails, answering the phones, cleaning toilets and arranging for babysitters. 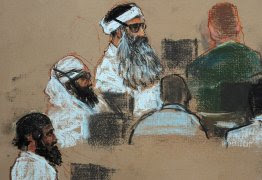 Men and women left at the real precipice, clothes melting on their bodies as a hundred stories of air offered the only release.

What kind of administration permits KSM to publish glamor shots that market Jihad around the world? What kind of Attorney General supports these efforts?

The same kind of A.G. that expends enormous effort to cover up voter intimidation by its New Black Panther allies, in a seeming effort to encourage anarchy and violence at polling places.

The Justice Department has ordered its career trial lawyers who have been subpoenaed by the U.S. Commission on Civil Rights not to appear to provide testimony or give documents in the investigation of DOJ’s dismissal of the New Black Panther Party voter-intimidation case... 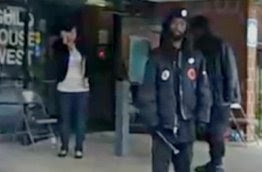 How a personnel guideline can supersede the force of a subpoena issued by the commission remains a mystery...

A source tells me that Adams was “not quite” threatened with the loss of his job, but plainly he and his colleague, Christopher Coates, the voting rights section chief, are being strong-armed to disregard a lawful subpoena. This is abject lawlessness, the sort of executive imperiousness that, if practiced by a Republican administration, would bring howls of protest from Congress, the media, and liberal lawyers’ groups. The Obama Justice Department doesn’t want to respond to a subpoena because they have a personnel rule? Next thing you know they’ll be claiming executive privilege for a social secretary. Oh yes, that’s right...

Any liberal with an ounce of intellectual honesty will receive a full and fair hearing on this blog if they can explain this outrageous behavior.

Mark my words: the trial of KSM will turn into a months-long miniseries as well as an effective infomercial for jihad. And, as was presciently stated in the days of Bill Clinton, Americans will needlessly die as a result of these policies.

In the case of Clinton, however, it was due to simple incompetence, arrogance and corruption. Under the current regime, however, it appears entirely intentional, perhaps step number six in the 12-step program to shred the Constitution.

Oh, I thought it was supposed to make him look like the Pakistani sitar player from ZZ Top.