Last one to leave California, please turn out the lights


Calculated Risk points us to the archetype of a liar's loan:

[A]ll of this began in the heady days of the mortgage boom ... [Ms. White] only knew that there seemed to be possibilities, even to those with little means such as herself, which is how a woman who had never paid more than $700 a month in rent and who had relied in recent years on Section 8 housing vouchers suddenly owned a house.

With 3 1/2 bathrooms. And walk-in closets, black granite countertops and a fireplace. 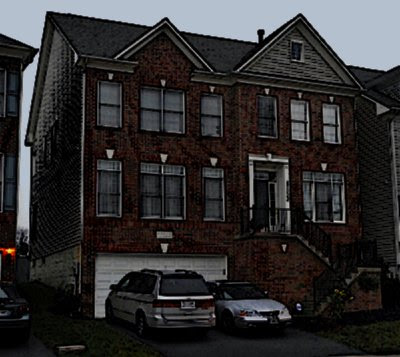 ...On settlement day, reality bore down.

...Papers were read and presented, most of which White did not try to decipher. ...White's papers cited income of $163,320 a year, even though she says her 2005 income-tax earnings were less than $15,000 and she relied at times on food stamps.

...White signed papers while waiting for the one she cared most about: her monthly payment. ... "Please let this be something I can afford," she said to herself. She was pretty sure she could afford $2,000. She told herself that if her day-care business did well, perhaps she could afford $2,500. If it was $2,800, she would struggle. Here, now, came reality: $5,635 a month.

To entice Ms. White to take the loan, the sellers -- both real estate agents -- promised to make the first two mortgage payments for her. White reportedly received $40,000 in cash at the closing, while the seller made over $200,000.

As expected, the house went into foreclosure. Ms. While is back renting an apartment.

A General Electric company called WMC Mortgage, which specialized in questionable subprime lending and would soon implode, had provided the financing. The taxpayers are subsidizing this and millions of other crooked financial instruments.

Most importantly, the mortgage catastrophe hasn't even really begun.

How can I say that? In the heyday of subprime loans, mortgage lenders invented the "Option Adjustable Rate Mortgage" or "Option ARM". These were the most toxic loans imaginable, allowing the debtor to "pick a payment." If they paid less than the minimum, that was okay: the loan would negatively amortize.

This means the amount owed (the principal) would increase. The assumption, of course, was that real estate prices would rise forever. So Option ARMs became the product of choice for all sorts of skulduggery. They were termed "liar's loans" because they often required no documentation, no proof of income and were reportedly abused by illegal aliens. 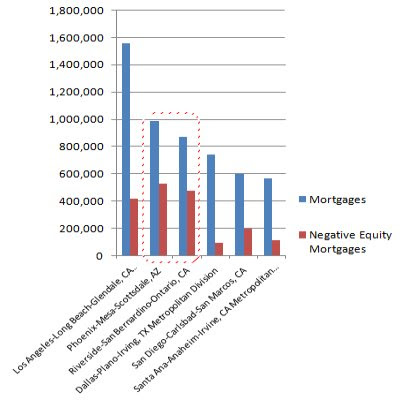 Furthermore, a huge swath of Option ARM resets are on the way. The loans were sold with low, teaser rates and have yet to hit their first "adjustment period." Doctor Housing Bubble explains that "78 percent of all outstanding option ARMs have yet to hit major recast points. Given that 58 percent of option ARMs are here in California, this is a one state wrecking ball."

The accompanying illustration depicts when the tidal wave of Option ARMs will hit. Put simply, we're at low tide today. 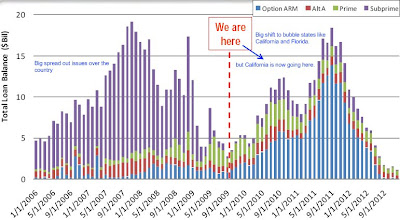 The Los Angeles area has approximately 1.5 million mortgages in force -- and 400,000 of those are already underwater!

Want to bet what's going to happen when the option ARMs start recasting in 2010?

Schwarzenegger may need that Hummer H1.