Whenever Democrats are foundering, expect them to deal...

"When this country belatedly recognized the wrongs of slavery, there were those who dug in their heels and said 'slow down, it's too early, things aren't bad enough.'" Yes, we called those people Democrats.

"When women spoke up for the right to speak up, they wanted to vote, some insisted they simply, slow down, there will be a better day to do that, today isn't quite right." We called those people Democrats, too.

"When this body was on the verge of guaranteeing equal civil rights to everyone regardless of the color of their skin, some senators resorted to the same filibuster threats that we hear today." Oops. Those were the Democrats as well. 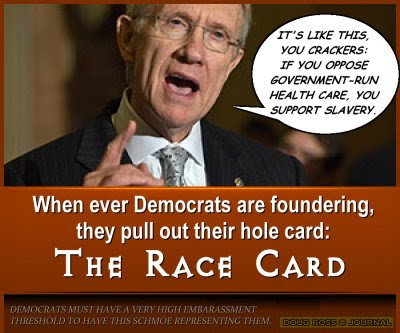 This guy is a walking disaster.

As an aside, the Democrat socialized health care plan appears to have been "penned from the pen."