Allen West's Letter to His Constituents

West is a hero. And I'm not talking about his commendable military service -- just his first month in Congress.

Over this past week I have watched and listened to members of the House of Representatives from across the aisle. 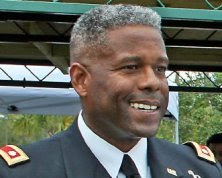 I am appalled at their ignorance, belligerence, and dishonest rhetoric filled with empty emotional platitudes. Have they no shame in realizing that their inept, incompetent failures are the reason why we are debating this continuing resolution? They failed to pass a budget during the 111th Congress.

Have they no honor in realizing that their fiscal irresponsibility over the past four years has resulted in our standing on the precipice of a fiscal canyon from which we may not recover.

Also troubling are the events in the state of Wisconsin which mirror those that happened in Greece several months ago. We are witnessing the abject hostility of a unionized entitlement class that is being lauded by the liberal left, seemingly to include our President.

It is such a critical time for our Republic, yet there seems no visionary leadership — it is as if America stopped producing adults. I have never seen a greater assembly of petulance and sophomoric behavior as what I have witnessed this week on the floor of the House of Representatives.

To those across the aisle, please explain to the American people how your economic policies have created a better environment for long-term sustainable growth.

This debate is about jobs and the economy.

It begins with remedying the spending problem on Capitol Hill. It includes tackling the burdensome taxation and regulation policies strangling our country. It is the understanding that Keynesian tax and spend policies did not grow America’s economy, but the indomitable, entrepreneurial spirit of the American people.

Government sets the conditions for job and economic growth, it does not create jobs.

I am pleased that we are having open debate in the peoples' house. However, there is clearly something lacking in this discourse — the recognition of the failure of the bureaucratic nanny-state liberal policies.

Rest assured that I will do everything in my ability to stand firm and lead on the principles that make America exceptional.

This is a man who our country's founders would have embraced.

Allen West and Michelle Bachmann are my front-runners for the Presidential nomination in 2012.

He was interviewed in the January Limbaugh Letter and it was inspiring. This guy is the real deal...far better than Christie.

I hope he runs, I've liked him from the start. But I haven't even heard a rumor of it being a possibility

Welcome to Congress, Mr. Congressman. I have cofidence the Allen West can make a difference.

Alan West Voted to extend some constitutionally questionable Patriot Act provisions, which I doubt the founders would have approved of. His explanation was unconvincing.

I couldn't agree more about Allen West -- obviously! I mean, I do run a blog called West to the West Wing 2012!

But Bachmann -- we need her so desperately in the House, I would hate to see her anywhere else. I'd vote for Bachmann for Speaker!

Agreed. And I'm with you on West and Bachmann.