Misunderstanderer of Islam accused of attempting to use chemical weapons and IEDs in Lubbock, Texas

I, for one, blame the militant Quakers. 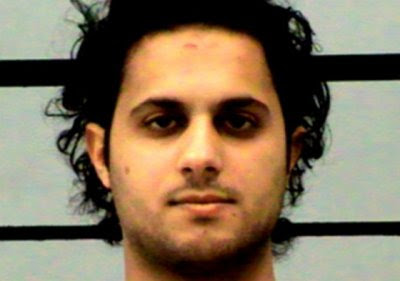 Khalid Ali-M Aldawsari, 20, a citizen of Saudi Arabia and resident of Lubbock, Texas, was arrested late yesterday by FBI agents in Texas on a federal charge of attempted use of a weapon of mass destruction in connection with his alleged purchase of chemicals and equipment necessary to make an improvised explosive device (IED) and his research of potential U.S. targets...

...The affidavit alleges that on Feb. 1, 2011, a chemical supplier reported to the FBI a suspicious attempted purchase of concentrated phenol by a man identifying himself as Khalid Aldawsari ... Frustrated by questions being asked over his phenol order, Aldawsari cancelled his order and later e-mailed himself instructions for producing phenol. The affidavit alleges that in December 2010, he successfully purchased concentrated nitric and sulfuric acids.

...Aldawsari used various e-mail accounts in researching explosives and targets, and often sent emails to himself as part of this process. On Feb. 11, 2011, for instance, he allegedly e-mailed himself a recipe for picric acid, which the e-mail describes as a "military explosive." He also allegedly sent himself an e-mail on Oct. 19, 2010 that contained information on the material required for Nitro Urea, how to prepare it, and the advantages of using it. 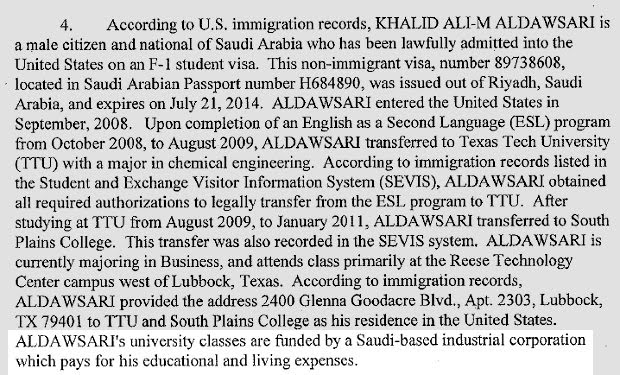 The affidavit alleges that Aldawsari also e-mailed himself instructions on how to convert a cellular phone into a remote detonator and how to prepare a booby-trapped vehicle using items available in every home. One e-mail allegedly contained a message stating that "one operation in the land of the infidels is equal to ten operations against occupying forces in the land of the Muslims..."

...Two legally authorized searches of Aldawsari's apartment conducted by the FBI in February 2011 indicated that the concentrated sulfuric and nitric acids; the beakers and flasks; wiring; Hazmat suit; and clocks were present in Aldawsari's residence.

FBI agents also found a notebook at Aldawsari's residence that appeared to be a diary or journal. According to the affidavit, excerpts from the journal indicate that Aldawsari had been planning to commit a terrorist attack in the United States for years. One entry describes how Aldawsari sought and obtained a particular scholarship because it allowed him to come directly to the United State and helped him financially, which he said "will help tremendously in providing me with the support I need for Jihad ... And now, after mastering the English language, learning how to build explosives and continuous planning to target the infidel Americans, it is time for Jihad." 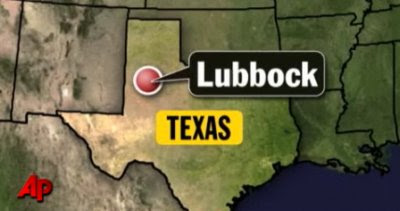 In another entry, Aldawsari allegedly wrote that he was near to reaching his goal and near to getting weapons to use against infidels and their helpers. He also listed a "synopsis of important steps" that included obtaining a forged U.S. birth certificate; renting a car; using different driver's licenses for each car rented; putting bombs in cars and taking them to different places during rush hour; and leaving the city for a safe place.

...Aldawsari conducted research on various targets and e-mailed himself information on these locations and people. One of the documents he sent himself, with the subject line listed as "Targets," allegedly contained the names and home addresses of three American citizens who had previously served in the U.S. military and had been stationed for a time at Abu Ghraib prison in Iraq.

In another e-mail titled "NICE TARGETS 01," Aldawsari allegedly sent himself the names of 12 reservoir dams in Colorado and California. In another e-mail to himself, titled "NICE TARGETS," he listed two categories of targets: hydroelectric dams and nuclear power plants. On Feb. 6, 2011, the affidavit alleges, Aldawsari sent himself an e-mail titled "Tyrant's House," in which he listed the Dallas address for former President George W. Bush. The affidavit also alleges that Aldawsari conducted research that could indicate his consideration of the use of infant dolls to conceal explosives and possible targeting of a nightclub with an explosive concealed in a backpack.

Let me venture a guess: this slimeball entered the U.S., enrolled in a chemistry curriculum, and learned how to wage Jihad thanks to one of President Obama's "outreach to the Muslim world" programs.

Which just about sums up this feckless administration in a sentence.

Why did this person have a slot at a US university? Weren't there any illegal aliens who were more deserving of that chance?

As a proud father of an 18 y.o. with a 3.2 GPA and letters for varsity football and track with all conference awards in these sports, I am disgusted in our pathetic government as I read this. My son is applying to colleges and would love to get into Texas Tech's chemical engineering program. No way in hell. He cannot because they have to let in ignorant illiterate islamonutter fanatics first. Damn Marxists have so screwed up this country.