Like me, you may be a little confused about the nature of the fight between the public sector unions and Wisconsin Republicans. After all, the unions are just upset about having to pay for some of their benefits, right?

...the Wisconsin Education Association Council, the largest teachers union in the state, has grossly abused [collective bargaining] for decades, resulting in the unnecessary siphoning of millions of dollars from Wisconsin public schools. Under current Wisconsin law, the [choice] of the insurance company that provides health coverage to school employees is a matter of collective bargaining in each school district.

In the majority of districts around the state, WEAC negotiators have used that law to pressure local school boards into purchasing coverage from WEA Trust, an insurance company established by and closely associated with the union. 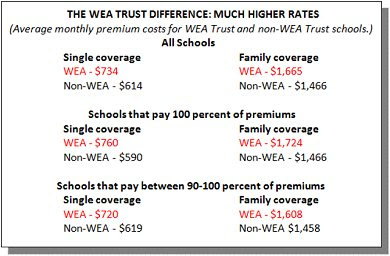 WEA Trust offers very comprehensive health coverage, at a very high cost to schools... A few dozen districts have managed to dump WEA Trust insurance over the past few years [and] they managed to save at least six figures their first year with a different carrier, and maintained steady rates in subsequent years, while still offering quality health coverage to employees.

Officials from other districts say they're also eager to dump WEA Trust coverage, but need their employees' anonymous claim histories from WEA Trust to share with other bidders. Several say they have never requested that information because they were told WEA Trust would punish them by pulling them out of local insurance pools, resulting in skyrocketing premiums.

Today many Wisconsin school boards consider themselves stuck with expensive WEA Trust health coverage, until state law is altered to take the identity of the insurance carrier off the collective bargaining table. Gov. Scott Walker's current legislative proposal would do just that, giving school boards the opportunity to freely shop for insurance and save millions of tax dollars for instructional purposes.

WEA Trust has grown very fat on public school dollars, with a net worth of $316 million and a team of 12 administrators all receiving compensation packages worth six figures per year... Sadly, this insurance swindle is endorsed by state law.

...most unions have traditionally come to the negotiating table demanding expensive WEA Trust insurance coverage, and the strategy has been effective. About 64 percent of Wisconsin’s 426 districts carry WEA Trust insurance, despite its prohibitive costs.

...WEAC pressures its local union officials to stick with WEA Trust. One district administrator told us about a meeting where everyone present, including union employees, agreed that a non-WEA health plan would be better for the district. He said state WEAC representatives were present and argued in favor of WEA Trust, just because it’s the union’s insurance brand.

...With the law on their side, many local unions won’t even consider alternative health coverage. They refuse to have the WEA Trust language taken out of their contract at bargaining time. If a school board wants to contest the coverage, the unions will frequently take the fight to arbitration.

Many school officials accuse WEA Trust officials of purposefully withholding insurance claim histories from districts that want to seek other insurance bids. That makes it nearly impossible for competing companies to prepare informed bids based on recent insurance activity in a district. It would be like asking a contractor to bid on a demolition project, without disclosing the size or condition of the building.

Those districts that seek claim histories are often threatened with higher insurance rates by WEA Trust, according to several sources.

This fight is about more than just benefits: it's about a rigged insurance operation that no one in their right mind would choose if given a real choice in the matter.

WEA Trust stands to lose millions through Governor Walker's heroic actions on behalf of the taxpayer - which is why the union bosses have reacted with violence, angry rhetoric and near-riots in the state capitol.

It has nothing to do with the kids. The union bosses want to steal more of your money with a crooked, rigged insurance scam.

A racket within a racket, great

>WEA Trust would punish them by pulling them out of local insurance pools, resulting in skyrocketing premiums

What I don't understand then is why the unions are fighting for ObamaCare. Wouldn't that put their little insurance scam out of business? Something doesn't add up.

The WEA trust would be given a waiver from ObamaCare.