One Chart to Rule Them All: the Obama Budget Apocalypse

Consider the anticipated spending trajectory over the next decade as entitlement spending and interest payments balloon.

Mr. Obama's budget, to be released Monday, calls for spending cuts and tax hikes that would slice about 14% of the approximately $8 trillion in cumulative federal deficits that would occur over the next 10 years without action being taken. It estimates the deficit will fall to $1.1 trillion next year as the economy picks up and the president's proposed spending freeze begins to have effect...

The current projected budget deficit is $1.6 trillion, a figure twice revised upwards from a starting point of $1.3 trillion.

...in other words, in less than six months, the FY 2011 budget—which has still yet to pass, scheduled for a vote this coming March 4—has had a deficit which has risen 23%.

And in response the president proposes to cut less than $100 billion a year from his bloated federal budget.

As for the President's vaunted "deficit commission"? Predictably, Obama blew them off.

Ask congressional Republicans about President Barack Obama’s fiscal 2012 budget proposal and they will seethe about an abdication of presidential leadership on the deficit... [but ask] former Republican Sen. Alan Simpson about it, and he shrugs. Reached at his Cody, Wyo., home, the former co-chairman of President Obama’s debt commission does not believe the commission’s work to bring down the federal debt has been abandoned, just because most of its recommendations are nowhere to be found in the budget plan.

...White House officials say there’s a reason why the president did not lay down his cards on what to do to curb the growth of Social Security and Medicare, to overhaul the tax code to bring in more revenue or to radically pare back spending. That moment will come soon, behind closed doors when Republicans and Democrats sit down together to work through the nation’s debt troubles...

I adapted the chart immediately above to reflect the timing of these disastrous budgets.

You see, dear reader, we have a president who has no interest in stabilizing the country's fiscal situation. Nor does he have any inclination to tackle the tough issues of entitlement reform.

This President is a walking, talking disaster and that's what the liberals are saying:

"...this president is too weak, too cautious, too beholden to politics over policy to lead. In this budget, in his refusal to do anything concrete to tackle the looming entitlement debt, in his failure to address the generational injustice, in his blithe indifference to the increasing danger of default, he has betrayed those of us who took him to be a serious president prepared to put the good of the country before his short term political interests... To all those under 30 who worked so hard to get this man elected, know this: he just screwed you over. He thinks you’re fools. Either the US will go into default because of Obama’s cowardice, or you will be paying far far more for far far less because this president has no courage when it counts."

That’s Andrew Sullivan, formerly Obama fan numero uno in the blogosphere, now coping for the second time in eight years with crushing disappointment from a president he ardently supported. Ed’s already written a bunch about the budget today so I won’t belabor it, but have a look at Andrew Stiles’s bullet-point list of the lowlights if you missed it. $26.3 trillion in new debt — repeat, new debt — alone over the next decade. Says Jake Tapper, summing things up in a single harrowing line, “At no point in the president’s 10-year projection would the U.S. government spend less than it’s taking in.”

On March 4, 2009, I wrote an article that included the statement "Obama's destruction of the economy is intentional." 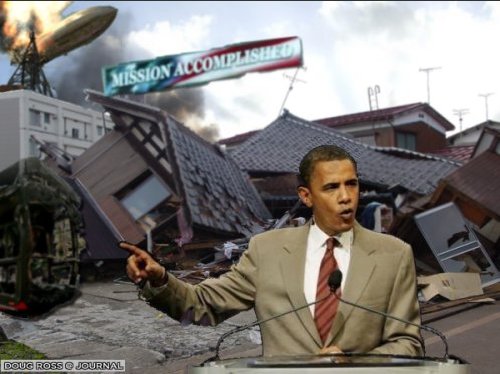 His budget proposal is so reckless, so wild, so egregious that there can be no doubt of his goal. I can only conclude that he seeks the destruction of America's capitalist system, free enterprise, and our way of life.

When even moonbats like Andrew Sullivan are heading for the hills, it's safe to say that we are careening towards an unmitigated disaster.

I just pulled the 2012 budget from Whitehouse.gov.

The man is a lunatic.

The only way out, imho, is to cut every program by 20%, including Social Security, Medicare, Medicaid, and Defense.

Plus, some departments like Education, HUD, and the FCC need to be defunded.

The only way to sell such cuts is to make sure it is shared sacrifice.

Otherwise, it seems we are headed to some of the same fiscal policies that undermined Rome.

The Pentagon budget + wars in Iraq and Afghanistan + nuclear weapons + veterans benefits + Dept of Homeland Security = OVER $1,000,000,000,000 a year. Defense spending doubled since 2001. Cutting spending on everything else is on the table, but not "defense". We build weapons of mass destruction as a welfare program for "defense" contractors like Cheney. If you had any balls you would post THIS comment.

How come morons like you never figure in decreased revenue from the ongoing bush recession in your bullshit graphs????? Whats the matter, facts got you tongue? Or did you just fail math?

Wow - how much LSD did you take in Nam?

Are you better off than you were 4 trillion dollars ago?

@(mis)infowhatever: Have you forgot that Obama told us the recession was over in June 2009?
IMO the Republicans did just drop the ball on reevaluating the Patriot Act. The Heritage Foundation may have claimed that the freshman Republicans just didn't know what they voting against the first go around but, my IL Reps did -- they wanted to take apart a too encompassing bill that is fiscally irresponsible.