Jimmy Carter spent billions on it 30 years ago. Barack Obama is wasting billions more today. That's the ephemeral idea that government -- and not the free-market -- can create "renewable energy".

And it's turning out to be the same epic fail now that it was in Carter's day. 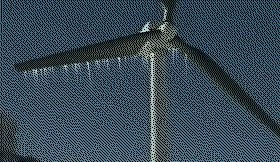 A $200-million wind farm in northern New Brunswick is frozen solid, cutting off a supply of renewable energy for NB Power.

The 25-kilometre stretch of wind turbines, 70 kilometres northwest of Bathurst, has been shut down for several weeks due to heavy ice covering the blades. GDF Suez Energy, the company that owns and operates the site, is working to return the windmills to working order, a spokeswoman says [...] conditions in northern New Brunswick have caused havoc for the wind farm this winter.

...The accumulated ice alters the aerodynamics of the blades, rendering them ineffective as airfoils. The added weight further immobilizes the structures.

Let me guess: someone will have to burn fossil fuels to thaw the damned wind farm out.

Clearly, global warming (caused by your light bulbs) iced up those blades.

Yeah, posting about a privately-owned and operated windfarm in Canada totally proves your point... whatever point that is... I'm not quite sure.

I live off grid in the Rocky Mountains and have 3 wind generators - NONE of them have ever frozen like that. Course, if they DID, we have a back up plan, the towers can be pulled down to service them.

Why didn't an energy company have a "Plan B"???