Walker to Fleebagging Democrats: You've Got 24 Hours. Make That 23 Hours and 59 Minutes.

Time is up for the fugitive Democrat state senators from Wisconsin, who are also known as the Fleebaggers (which is the term they prefer, I'm told). Governor Scott Walker has thrown down the gauntlet.

Republican Gov. Scott Walker on Monday gave absent Democratic lawmakers an ultimatum to return to Wisconsin within 24 hours and vote on a proposal to reduce the power of public sector unions or the state would miss out on a debt restructuring. 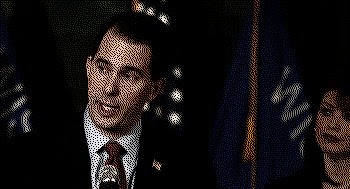 Walker stepped up the pressure on 14 Senate Democrats who fled the state to avoid a vote on the bill as he prepared to unveil on Tuesday a two-year state budget that he said cuts $1 billion from funding to local governments and schools.

What began as one small state trying to rewrite the rules of labor relations has blown up into what could be the biggest confrontation with American labor unions since then President Ronald Reagan fired striking air traffic controllers in 1981.

"Failure to return to work and cast their votes will lead to more painful and aggressive spending cuts in the very near future," Walker's said in a statement.

If the budget bill isn't passed before the deadline, more than a thousand state employees will lose their jobs.

And that will be the Democrats' choice.

Someone suggested declaring the seats vacant. Then do a special election to fill the seats. THEN push redistricting through.

They wont be back anytime soon. The bill is at the last legislative step, too late to debate or amend it, just an up or down vote, which will happen as soon as one of them return. The bill makes union membership optional, prevents the state from collecting dues for the unions and forces an annual recertification vote. Union dues equates directly into Democrat campaign cash, so neither the unions or the party can tollerate the inevitable loss of membership that would occur. They have no choice but to stay away and hope something happens that will turn events in their favor. These are the people that designed out current $3.5 billion deficit, blowing another $165 million wont cause any lost sleep for them.

The IRS considers elected officials as employees. In most cases, failure show up or provide an excuse for three days is considered job abandonment and termination is the result. ( with no unemployment compensation)

All of these people should be fired. That includes all the teachers. What they are doing is called dereliction of duty. Perhaps nonfeasance is another way of putting it. The Governor should terminate every one of them and if he can't, then he should resign.