*Whew*, that's a relief -- Someone alleged to be the Director of National Intelligence reports that the Muslim Brotherhood is... secular

There's a fine line between genius and insanity -- and that line may be the Visio connector from the White House to the DNI.

Director of National Intelligence James Clapper told House lawmakers that the Muslim Brotherhood in Egypt is "largely secular" and has rejected violence and decried al-Qaida as a perversion of Islam, NJ's Chris Strohm reports.

Well, that statement's expiration date was roughly 17 minutes. And the attempted walk-back of the inanity sounded, truth be told, even worse. 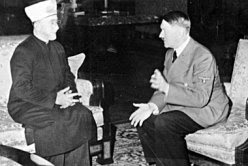 “It’s not quite right to call them a secular organization,” Singh said. “It’s true that they are laymen, they’re not clergy, but that doesn’t make them secular… they do believe in a big role for religion in the state, they don’t believe in the separation of mosque and state,” he added.

“It’s hard to know what kind of policies or ideologies [the Muslim Brotherhood] would have without the suppression of the Egyptian authorities preventing them from perhaps saying what they really feel," he said.

Yes, it's quite hard. Dense, in fact.

The Muslim Brotherhood's history is well-documented. Founded in the 1920's, it had ties to the Third Reich and Nazi Germany. It distributed Mein Kampf throughout the Middle East and promulgated the hatred of Jews, Christians and the West in general. Its progeny include Al Qaeda and Hamas.

Its creed is the establishment of an Islamic Caliphate. Which, come to think of it, sounds very secular to me.

After all der leader referred to Jakarta, Indonesia has his home town.

I moved from the city where I was raised when I was in my early twenties. I have never referred to my place of birth and early life as "my home town"

The Muslim Brotherhood's inspiration came from Sayyid Qutb, the man whose writing may have been the inspiration for a certain person by the name of Osama bin Laden to pursue a jihad.