The Washington Post tried its very best to ignore the biggest Obamacare news story of the day. But they couldn't quite mask it entirely. Please consider the effusive reporting of "States argue against implementing health care law". 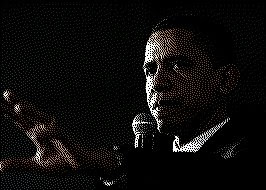 Florida and 25 other states suing to stop President Barack Obama's health care overhaul say in a new legal filing that they should be allowed to stop following the law immediately.

The states filed a response late Wednesday to an earlier Justice Department request. The states say a federal judge in Florida declared that the law is unconstitutional, meaning they do not need to implement it.

The Justice Department wants the judge to order the states to follow the law pending an appeal to a higher court.

The entire law was voided by the judge. An injunction was not necessary because there is no law to enforce.

The law is dead. Kaput. Bupkis. And any HHS bureaucrat who is in the process of implementing it risks a violation of 18 USC 641, punishable by up to ten years in prison.

Eric Holder won't be a feckless hack AG forever. And By Crom's Anvil we will pursue and prosecute those who have attempted to rip our society apart.

Remember that, losers. We will pursue you. We're elephants. We never forget.