Straight out of Compton: teachers' unions in California's worst school system battle parents and children to preserve the status quo

Democrats have many failures for which they can take credit. But none is as tragic as the party's callous treatment of inner-city kids who long to escape failed public schools. Only when the situation becomes dire enough will legacy media -- in this the Los Angeles Times -- start to pick up the story.

Consider, if you will, "Compton parents trigger reform" by reporter Jim Newton.

Parents at McKinley Elementary School petitioned to force change at the school under California's 'parent trigger' law. But the school's response has been to delay and intimidate to preserve the failed status quo. 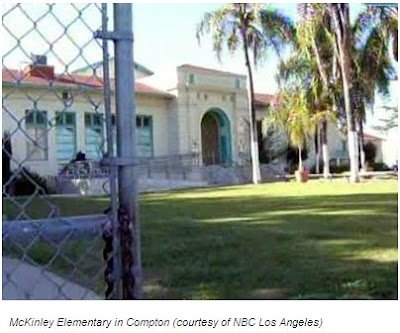 Marlene Romero watched with growing anxiety as her 8-year-old son suffered through third grade at McKinley Elementary School in Compton. She was unhappy with his progress and felt trapped at a failing school. Then, taking advantage of a state law that allows parents to band together and demand change, she signed a petition...

...Behind its cheerful beige-and-turquoise exterior, McKinley is a failed school. Its state API scores earn it a 1 on a scale of 1 to 10. It ranks 22nd out of 24 schools in Compton, and Compton is not a model of educational excellence...

To their credit, the McKinley parents refused to accept that things had to be this way. Under a year-old state law known as the "parent trigger," when half or more of the parents at a failing school sign petitions demanding change, they can force the staff to be replaced, the principal to be ousted and the school closed or replaced by a charter. A strong majority of McKinley parents, guided by the organizing efforts of a reform group known as Parent Revolution, filed their petitions on Dec. 7, 2010, asking for charter operator Celerity Educational Group to take over the school.

In theory, the Compton school district and its teachers union could have welcomed that outburst of parent involvement and appreciated the opportunity it offered for the school's suffering children. But no such luck. That would have required a bureaucracy devoted to educating children rather than one bent on preserving its authority.

...opposition [to the parents' efforts] continues and is now surfacing at the state Board of Education, which is charged with writing regulations to implement the parent trigger law. New board members appointed by Gov. Jerry Brown have signaled that they intend to water down the [trigger] law. They call it "cleanup," but that's a euphemism for gutting, and they know it...

...Compton officials who condemn children to an inferior education are stealing from them just as surely as if they broke into their homes. Any legislator who votes to defer the hopes of parents who have petitioned for change should consider his role in squandering the promise of these children.

This is the Democrat Party in action: a party beholden to the public sector unions and bent on maintaining the status quo no matter how malevolent the results.

Let me explain how this game works.

Increasing funding for the Department of Education has nothing at all to do with education. It has to do with getting more Democrats elected -- using the taxpayers' money.

• The Department of Education awards billions in grants to public schools for things like "dropout prevention", which can't work and have never worked

• The public schools use the increased funding to hire more teachers, who are forced to join a teachers' union like the NEA or the AFT

• The teachers dues help fund the massive war-chests of the unions, which then...

In other words, your tax dollars are helping fund both failed school systems like Compton McKinley and failed presidents like Obama.

Here's a simple missive to Republican leaders in the House:

Defund all public sector unions that are backdoor channels to the Obama reelection campaign.

Shut down the entire federal government if need be. Shut it down.

Oh. And do it for the children.