The boobs in legacy media are desperately spinning President Mubarak's resignation as a victory for some sort of social democracy movement in Egypt and an amorphous "Obama doctrine": 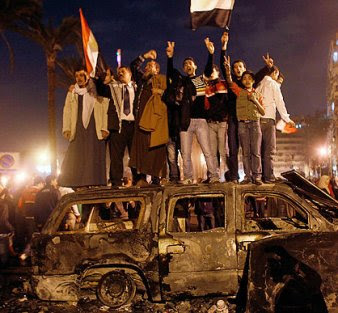 • Credit Obama, Not the Bush Administration, for Seeds of the Egyptian Revolution - "...the pro-democracy movement in Tahrir Square has much more in common with the grassroots, bottom-up spirit of the Obama campaign than the messianic, barrel-of-a-gun foreign policy pushed by George W. Bush."

• The Messy Failure Of [Bush's] Freedom Agenda - "That's what we are seeing in Cairo — the chaotic push and pull of millions of Egyptians deciding to clean up their own country's mess... barging in, Bush-style, to someone else's house, no matter how good the intention, is rarely the right thing to do."

• Mubarak's exit and the Egyptian democracy movement [are] of crucial importance to the Arab world - "...while the Muslim Brotherhood was part of the protests, the democracy movement there was primarily nationalistic and ecumenical rather than Islamist in its genesis..." 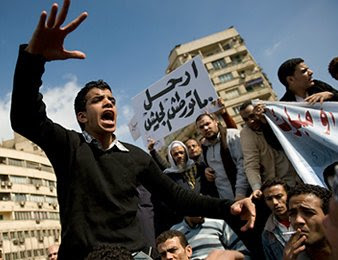 It doesn't take an expert in Middle East affairs to predict that a secular democracy doesn't stand a chance.

• Muhammad ElBaradei is a puppet of Iran, a non-entity in the region and -- if he assumes power -- nothing more than a temporary figurehead.

• The best organized political movement in Egypt is the radical Muslim Brotherhood, said to command the loyalty of at least a third of the population.

• There are no serious secular democracy movements in Egypt.

The Tehran Times reports on the Mullahs' opinion of the situation unfolding in Cairo. 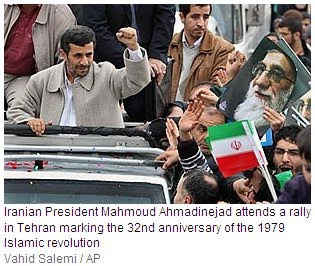 In Iran, millions of people from all walks of life held rallies across the country to commemorate the 32nd anniversary of the Islamic Revolution... The people chanted “God Is Great,” “Down with the United States,” “Death to Israel,” and other slogans.

...Chants of “Egyptians, Tunisians, your uprisings are just and we are with you,” “Death to Mubarak,” “Hosni Mubarak, ‘mubarak’ (congratulations) on the uprising of your people,” were heard in the streets. Some people also set an effigy of Mubarak on fire... They also reaffirmed their allegiance to the concept of velayat-e faqih (rule of the supreme jurisprudent).

...In his speech, the Iranian president said that a new Middle East will take shape in which the United States and Israel will have no place... 'Despite all the (West’s) complicated and satanic plots... a new Middle East will take shape soon without the Zionist regime and the United States. And there will be no room for the arrogant in that Middle East,' Ahmadinejad stated... The world will soon savor the sweet taste of a world free of Zionism, arrogance, and bullying, he added.

“You have reached a dead-end,” the president stated, addressing the global hegemons... Take away the Zionist regime, which is the source of all corruption, and liberate the region, Ahmadinejad said, addressing the United States.

Iran's leadership is, of course, posturing to prevent a repeat of last year's bloody "Green Movement" demonstrations. If there's a best hope for a real democracy movement in the Middle East, it lies with Iran's Green Party.

After all, they're the people who have actually lived for decades under the barbaric primitivism of Islamist rule.

Obama Doctrine: Enemies to the table, allies under the bus.