Motivational speaker didn't want to live in a van down by the river: pulls off $18M life insurance scam by hiring hit-man to kill himself

Not exactly an inspirational story.

A motivational speaker paid a hitman to kill him so that his family could receive $18 million in life insurance payments. 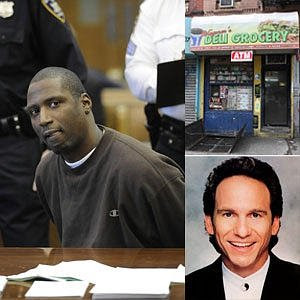 Jeffrey Locker, a 52-year-old father of three, was murdered in July 2009 by a man named Kenneth Minor, who's now on trial for the crime. Minor's lawyer, Daniel Gotlin, told an almost unbelievable story of how Minor came to kill Locker. Locker had paid a career criminal in Harlem to shoot him: he was deep in debt and wanted his family to be able to claim his life insurance.

When the hitman backed out and ran away, Locker spent time walking up and down the streets, asking random strangers to shoot him in exchange for money. He approached Minor, whom he'd never met before that night. He offered him his ATM and credit cards, saying he'd paid another man to murder him, but the man had run off with his cash. He then instructed Minor to tie his hands with wire, take a knife from the glove compartment of Locker's car, and hold the knife while Locker thrust his body forward and stabbed himself with it. Locker was later found dead in his car.

In a statement to the court, Minor said Locker had told him "it had to look like a robbery so his family can get what they deserve." Locker had set up the scene to look like a crime had occurred: he'd gone to a store and bought some water and condoms beforehand, then had Minor strangle him with some wire and tie it to the headrest as if there had been two killers in the car: one sitting in the back seat, and the knife-wielder in the front.

Gotlin says Minor, his client, should not be convicted of murder. "[Locker] wasn't killed by some wicked man," he told the court. "He killed himself -- that's what happened here."

Peter Casolaro, the lawyer for the prosecution, disagrees: "When you're paid money to kill another person, that makes you a contract killer, a murderer."

When I think of 'motivational speaker', I think of Matt Foley, not bizarre contract killings. Until now.

at 11:01 AM
Email ThisBlogThis!Share to TwitterShare to FacebookShare to Pinterest
Labels: Crime, Water-cooler