Of course, that's exactly what Democrat Bill Clinton said seventeen years ago, when he vetoed legislation that would have permitted drilling in ANWR's coastal plain. Had Clinton signed off then, we'd have started producing oil seven years ago.

Which puts this troubling report in context. 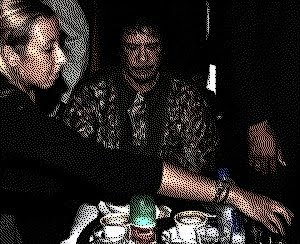 Time Magazine's intelligence columnist reported on Tuesday that Libyan leader Muammar Gaddafi has ordered his security forces to sabotage the country's oil facilities, citing a source close to the government...

Robert Baer said the sabotage would begin by blowing up pipelines to the Mediterranean... "Among other things, Gaddafi has ordered security services to start sabotaging oil facilities," Baer wrote. "The sabotage, according to the insider, is meant to serve as a message to Libya's rebellious tribes: It's either me or chaos."

The growing violence in Libya has forced a number of oil companies to shut in production in Africa's third-largest oil producer and disrupted flows from the country's export terminals... Paraphrasing the source, he said that Gaddafi had also ordered the release from prison of the country's Islamist militant prisoners in hopes they would act on their own to sow chaos.

Thanks to the modern, Soros-controlled Democrat Party, the United States is the only country on Earth that restricts access to its own energy reserves.

Which makes about as much sense as anything else in the Democrat Party's platform.

What does the president do? He takes out the old saw of ANWR. ANWR wouldn't produce a drop of oil in ten years..."

If we had approved drilling the moment that Schumer uttered that bit of "sustainable" wisdom, we would be seven years closer to pumping oil from that field and that would be just in time to keep the Alaska oil pipeline full enough so it could keep running.