The most under-reported news story of the week: Governor Walker wants to save 12,000 teachers' jobs

Mike Shedlock reports the news that legacy media is apparently too busy to cover. 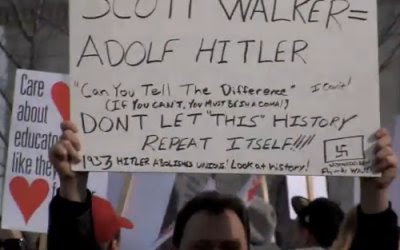 Unions don't really want to save jobs. Rather they want every union worker to extort every possible cent from every possible taxpayer. The goal of unions is to do the least work at the most cost.

Governor Walker's proposal will save 12,000 jobs. The union does not care. It would rather fire 12,000 teachers than for all of them to make modest concessions.

I have countless examples to prove that, yet the myth goes on.

If this was really "about the kids" rather than about the greed and arrogance of the public unions, teachers would be in the classroom teaching instead of fraudulently calling in sick, with help of doctors aiding and abetting that fraud. 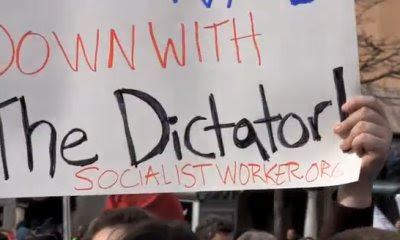 "I don't want a single person laid off in the public nor in the private sector and that's why this is a much better alternative than losing jobs," Walker told "Fox News Sunday... If we're going to be in this together, (cut) our $3.6 billion budget deficit, it's going to take a whole lot more than just employee contributions when it comes to pensions and health care... it's like a virus that eats up more and more of the budget if you don't get it under control."

President Obama, whose group Organizing for America, has bused in some of the nearly 70,000 protesters outside the state capitol on Saturday, last week called the bill "an assault on unions."

Under the governor's proposal, unions still could represent workers, but they could not force employees to pay dues and would have to hold annual votes to stay organized. Only wages below the Consumer Price Index would be subject to collective bargaining, anything higher would have to be approved by referendum.

As Mish points out, no less a Democrat icon than FDR understood that public sector unions are antithetical to the concept of American government.

All Government employees should realize that the process of collective bargaining, as usually understood, cannot be transplanted into the public service... Particularly, I want to emphasize my conviction that militant tactics have no place in the functions of any organization of Government employees.

A strike of public employees manifests nothing less than an intent on their part to prevent or obstruct the operations of Government until their demands are satisfied. Such action, looking toward the paralysis of Government by those who have sworn to support it, is unthinkable and intolerable.

Yet today's Democrat Party -- which has aligned itself with the most horrifically failed policies of the modern era -- has set a course for fiscal destruction.

Today the Democrat Party is the government leviathan. They are inseparable, like a pod-person from Invasion of the Body Snatchers.

There's no choice: the public sector unions must be broken. And it's truly a pity it had to come to this.


Linked by: Michelle Malkin and Memeorandum. Thanks!
at 7:23 PM
Email ThisBlogThis!Share to TwitterShare to FacebookShare to Pinterest
Labels: Crime, Democrats, Economy, Obama, Unions

You've foreshadowed the easiest way to end the standoff - Gov. Walker can order the layoffs at any moment. And, you know what, sending the layoff notices on the most direct path toward the ultimate and necessary goal of breaking the unions - because it will create doubt, dissension, and contempt among their rank and file. It's unfortunate, but this is in fact a "band-aid" moment in history. Tear the b**ch off.

If Gov. Walker can solve this with minimal damage to the state and its law-abiding citizens, then he's on to national prominence among GOP political personalities.

The fact that all the public polling by neutal observers like the Journal-Sentinel put the large majority behind Walker means he has the support to end union dominance in WI politics for once and for all.

The national crime spree HQ, the DNC, is busy dispatching its commissars to WI to get the cadres back in step with the program, while the Indonesian Imbecile clubfoots his way from side to side trying to figure out how to keep his troops happy.

Not only is this not "about the kids", this time I don't even think I have heard that point advanced. And I live in the eye of the storm here in Wisconsin.

It's definitely just a power struggle, no more and no less.

What I'm going to say, is not meant to be condescening; I do not say that lightly:

As I watch these sign of these radicals with labeling Gov Walker 'Hitler, dictator' I am reminded of the gullible germans who fell for the 'Community Organiser Hitler' who was excellent at 'rabblerousing', giving good speeches, waging class warfare etc.., and we all know how that ended.
The organiser in chief in DC wages hatred against americans not aligned with him, and needs to stop.
For me, I wondering how they can become so gullible, and ignorant of history, not to mention their comparison to the constant display of 'Hitler' is very offensive to me, after all Hitler wiped out 2/3rds of my family in the Czech Republic, and in Germany; my father before dying at the age of 29 was able to give some true accounts what took place.

We had a bitter experience with a union early in our lives. My wife was working a part time job in a union shop and of course had to join as a condition of employment. Because it was a low wage, part time position, the union dues vaporized the majority of her take home pay. When we asked them to cut her a break for a part-time position, they gave us that "brother and sister" crap. It was immediately obvious that despite what they said, they weren't looking out for us, they only wanted to keep the money coming in to their coffers. Since she was forced to work for basically nothing by the union, she quit. They didn't care a bit that one of their members was out of a job.

I see the signs they put up equating Gov. Walker with a dictator. Softies, these bastards won't last a minute in a true dictatorship. Khadafy of Libya ordered indiscriminate attack on his fellow citizens, an action of a dictator, while Gov. Walker tried to negotiate with those who oppose his action.

Damn, it's hard to reconcile the two. I might need to go back to publik skule to learn me some nowledj.

We used to work with refugees from Laos, Burma and Cambodia, we know the difference between true dictatorship and idiotic comparison via mental diarrhea from partisan political hacks.