You've got to give the state of Arizona credit: its top legislators and administrators possess more guts than President Obama's entire team of bureaucrats combined. When sued, Arizona sues back. When knocked down, they stand up and throw haymakers.

A new proposal at the Arizona Legislature will take the state's fight with the feds to a whole new level: It would let the state actually nullify federal laws that legislators believe are invalid.

The measure crafted by Sen. Lori Klein, R-Anthem, would set up a committee of 12 lawmakers to review federal laws and regulations to determine which are "outside the scope of the powers delegated by the people to the federal in the United States Constitution."

...her measure says the only court ruling that Arizona will accept is that of the U.S. Supreme Court...

...She specifically singled out "Obama-care," last year's national health care law, and its requirement for individuals to obtain insurance or face a fine. If nothing else, she said, that flies directly in the face of a measure Arizona voters approved just last year providing state constitutional protections against such requirements.

Arizona, to its credit, has been particularly aggressive in combating the bizarre and often contradictory dictates emanating from Washington. Among their challenges to federal authority:

• SB 1308 and HB 2562 setting up interstate compacts to honor each other's birth certificates segregating children who are considered U.S. citizens from those who are not; 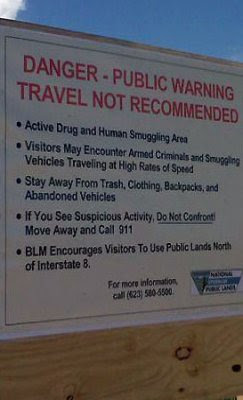 • SB 1309 and HB 2561 defining Arizona citizenship, part of the move to deny U.S. citizenship to children of illegal immigrants;

• SB 1328 saying Arizonans do not have to comply with a federal law or rule if they allow a federal employee or member of Congress not to comply;

• SB 1545 allowing the production of nuclear fuel in Arizona free from federal regulation;

• SCR 1016 requiring approval from the legislatures of half the states to increase the federal debt;

• HB 2077 requiring any federal agency coming into a county to conduct official business to first register with the sheriff;

• HB 2471 barring the appropriation of any state funds to comply with a federal mandate unless the federal government provides a report to show the mandate is constitutional;

• HB 2472 allowing the state to acquire federal property by eminent domain unless the federal government first got legislative permission to obtain the land in the first place;

• HB 2544 requiring presidential candidates to provide certain proof of citizenship before they can appear on the ballot in Arizona;

• HCR 2015 calling for a constitutional convention to adopt an amendment to require consent of three-fourths of the states to increase federal debt;

While I don't support some of these bills (a constitutional convention, for instance), it's good to see an organized rebellion against unconstitutional and extra-constitutional behavior that has become standard fare for the Obama administration and an insatiable, power-hungry Democrat Party.

Could we have a situation where the Federal Government sends in agents to enforce a federal law? What if those agents are arrested by state or local authorities? Troops were sent in to Selma for school desegregation, would it happen if a state refused to put Obama on the ballot in 2012 or failed to follow some gun law? I can’t help but wonder what American city would be the first to have tanks roll in.

If all present rules are followed to have Obama added to the Arizona ballot, what reason, legal or otherwise, would one have to eliminate his name from their ballot?

He has already met the requirements to run for president, so what would be the grounds? Just curious....