'Obama's Revenue Estimates are Either Fantasy or Comedy'

Chris Martenson has an excellent summary of the blatant scam that is the Obama 2012 budget. Think I'm too harsh? Consider the lowlights of "Obama's Revenue Estimates Are Either Fantasy Or Comedy".

Fantasy or comedy? I couldn't decide which way to label the Obama budget, so I went with both. 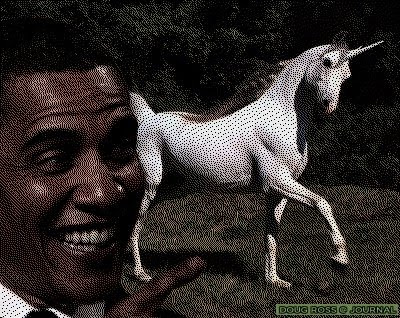 The bottom line is that the Obama administration has brought forth the most unbelievable revenue increase that I have ever seen proposed in a budget, a whopping 65% increase in revenues in just four years, which will - miracle of miracles - drop the deficit as a percent of GDP from nearly 11% to just 3.2% over those same four years.

The only problem with this scenario is that it stands virtually no chance of actually happening. Revenue will be far lower than projected and the deficit correspondingly higher.

One of my abilities is spotting bogus numbers quickly, and another is to make reasonably accurate projections without a staff of hundreds. For example, in 2009 I called for the Social Security fund to soon begin dipping into negative territory when the CBO was clinging to the illusion that 2017 was the 'below zero' date. Turns out I was right, and it wasn't a terribly difficult call to make. A little trend projection here, some assumptions about early retirement there, a higher and more realistic assessment of peak unemployment, and - voila! - a reasonably accurate projection was made.

Let's look at the recently released Obama budget, which is so far off the mark that no special abilities are required beyond the ability to suppress the urge to chuckle:

The green circles show the rosy deficit-reduction estimates, while the red arrows indicate the incredible 65% increase in federal revenues over a single four year period. 65%! How likely is that? Is it realistic?

[Answer: no. But how about] if we compare the projected increases historically on an inflation-adjusted basis - would that put them in a better and more believable light?

In this next chart, we simply chart each year's federal revenues after correcting for CPI (we used the Obama budget CPI assumptions for the years 2011 - 2015 to discount the future so everything is in 2010 dollars).

Are these numbers any less fuzzy? Nope. Even on this basis the proposed revenue increases are the largest on record, bar none.

Using these assumptions, and generously assuming that things more or less carry on as normal and even more generously that the economy magically grows to $19 trillion as the Obama team has assumed, the actual budget deficit will be no less than 8% of GDP each year between here and 2015.

My estimates translate into a roughly $1.5 trillion cash deficit each and every year -- give or take a little -- digging our national debt hole deeper by another $7.5 trillion by 2015.

This, however, is merely my starting bid. I can easily envision deficits that are far higher in both aggregate and percent-of-GDP terms, due to some combination of rising energy prices and debt overhang dragging the GDP figure downwards, and rising interest rates driving federal costs higher...

Show it to a Democrat you love. And then batten down the hatches. It's gonna be a bumpy ride.

"Show it to a Democrat you love. And then batten down the hatches. It's gonna be a bumpy ride."

Hardly. The democrat reaction is as predictable as a Charlie Sheen drug bender: this is all Bush's fault.