Wisconsin's Democrat Legislators Go on a Road Trip, Hold Awesome Toga Party, Then Check Out Otis Day and the Knights at the Dexter Lake Club

Pity that Dean Wormer found out. 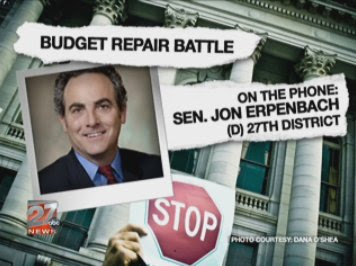 The Wisconsin senate democrats fled the state today rather than vote on a budget repair bill... WREX [reported that the] senators ran to the Clocktower resort in Rockford...

...They are reportedly back in Wisconsin. Let’s hope the cops were there to greet them as they crossed the state line... Note to Wisconsin police- While you have these lawbreakers in custody, please check for liquor, drugs, tax records, legal residence, cash in the fridge and birth certificates. Thank you.

In an interview with WKOW by cell phone, Wisconsin State Senator Jon Erpenbach claimed that running away from the state capitol wasn't shirking his job.

He said he was doing his duty, representing the citizens by leaving town during the midst of a multi-billion dollar budget crisis.

Wonder how that argument's going to go over with the electorate.

Somebody check Bill Ayers' basement. Gotta be at least one in there.

Wait until Otis sees us! He loves us!

I am one of Erpenbach's electorate (not that he was of my choosing). I can't wait 'til he holds his next townhall meeting and ask him about this escape. What an idiot.

Running away is doing your duty?

That's an interesting look into the mind of a democrat.

Makes me glad I live in Indiana.

Democrats on display. Take a good look America. Is this really what you want?

Every patriotic American supports what the Democrats are doing. Walker is deliberately sabotaging the US economy during a time of war in order to pay off his wealthy donors.

Every patriotic American supports what the Democrats are doing.

If every patriotic American were doing his/her duty, a great deal of Demoscummic blood would be running in the streets.

Walker is deliberately sabotaging the US economy during a time of war in order to pay off his wealthy donors.

Don't give me that BS, puzzy. You libtards have done nothing but undermine every single war effort we've undertaken for the last 60 years. You azzclowns are nothing but cowards.