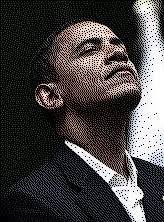 The president read from a prepared statement using his trademark twin teleprompters, asserting "...it is imperative that Undocumented Americans be granted collective bargaining rights" that will "force employers to take their demands seriously". Obama also noted that it would "level the playing field with documented Americans in the interest of global fairness."

More specific sources about both ideas: collective bargaining rights for illegals and the high speed train that is to run from Mexico City to Phoenix would be very helpful. Thanks for the info.

President BO is very close to the tipping point. The point beyond which the damage to America and the world is not reversible.

He just can't stop being a douchebag, can he?

@Bones - I was hoping it was obvious that this was satire, but apparently it's still too close to reality.

I got the satire, but keep in mind that if the last 2 years were described in a futuristic novel, it would have been called a "dark comedy"

I read it and was looking at the site to see if I was really at the Onion, and told my son, if this is true, Pres. Obama is even more Machiavellian than I thought - that he's really a conservative - the ultimate in wolf in sheeps clothing!!! Thanks for the heart attack, lol