Consider the following data-points as backdrop to the public sector union skulduggery in Wisconsin: 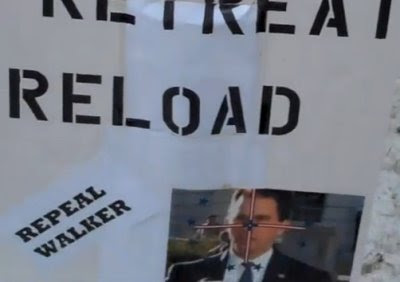 • In California roughly 200,000 of the 235,000 state employees are unionized. In the last decade, pension payments by the state increased 2,000% with $3 billion paid out in 2009 alone. 15,000 retirees collect at least $100,000 a year. Many are former police officers, firefighters and prison guards who can retire at age 50 with pensions that pay 90% of final year's pay and are indexed for inflation

• In Illinois, more than 4,000 retirees receive in excess of $100,000 annually and nearly 15,000 collect more money than they ever did as state employees. The state's pension system is the most underfunded plan in the nation with a $50 billion shortfall

The economy is flat on its back and the states' pension systems are about to collapse.

And the crybabies in Wisconsin are complaining that they'll have to contribute 5.8% of their salaries towards pensions and contribute 12.6% of their health insurance premiums (hint: the national averages for real workers -- real because they're the taxpayers, not the tax-takers -- are 7.5% and 20%, respectively).

It's high time that public-sector unions were outlawed and all such organizations currently operating disbanded. It's clear that they serve no useful purpose other than soaking taxpayers and their rank-and-file members. It's simple math: it can't last and it will all collapse.

My wife has been a government employee for over 20 years and her pension will pay her 11% of her salary at retirement at age 65.