NBC’s David Gregory hit John Boehner with it over the weekend, and now grilling 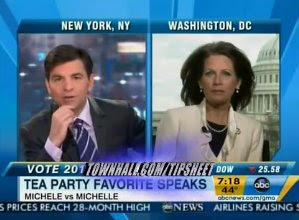 conservatives about their beliefs concerning President Obama’s birthplace and faith seems to be an all-out media fad. I wouldn’t really mind that necessarily if it didn’t come at the expense of trumping other important topics — but maybe that’s the objective of the questioner(s).

Since when do random GOP legislators take responsibility for a fringe group, members of whom may be plants?

For the best example I can remember, rewind to 2006, when Brian Gibson lobbed underhand softballs at the least experienced presidential candidate in history, one Barack H. Obama. Compare and contrast:

The Anchoress summarizes the difference in a sentence: "So there, you have it - another utterly insane day in American politics, where 'big time professional journalists' ask Presidential candidates how they feel about being so great while drilling vice presidential candidates on Russia."

Come to think of it, Jon Stewart has been far, far more credible than any network news personality for several years now.

I was impressed by her handling of Stuffy as well. Even said I would vote for her.