Founding Bloggers and Gateway Pundit have the hilarious photos.

Spotted in the wild, south of the Illinois-Wisconsin border! 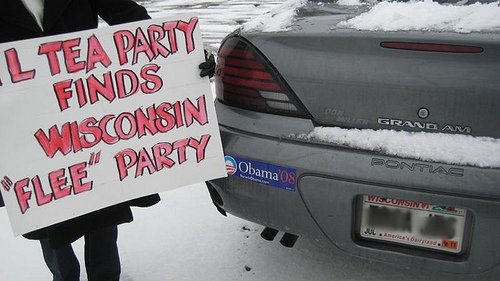 Illinois Tea Party board member Doc got the Heritage Suites in Harvard, and found the fleeing senators in the lobby of the motel. He said that they were laughing like school children. News cameras were there.

Doc confronted the senators, saying, “Do you know any reason why you shouldn’t be recalled for your failure to fulfill the duties of your office?” and the like. They asked him who he was. When he identified himself as a member of Northern IL Tea Party the mood changed. The hotel clerk asked him if he was a paying guest. He/she said, if he wasn’t he would have to leave.

Doc asked if this was still America. The clerk called the police. Three cars pulled up. Doc went outside and said, “I guess I’m the guy you’re looking for.” They said they had to go into the lobby to pick up the complaint against him. 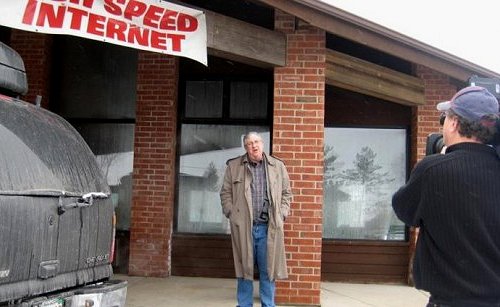 Doc was interviewed by a reporter outside the hotel. The reporter asked for his name, and Doc said, “It’s “Doc” — if they’re going to try to arrest me, that’s all you need.” Then he drove away.

State senators who miss two or more session days will no longer get paid through direct deposit. They’ll have to pick up their checks in person on the Senate floor during a session... The new rule is aimed at forcing the return of 14 Senate Democrats who have been hiding in Illinois since Thursday. They fled the state to stall a vote on an anti-union bill, and have threatened to stay away until Republican Gov. Scott Walker agrees to compromise. Tuesday’s vote was along party lines. The three Republicans on the Committee on Senate Organization voted for it and the two Democrats opposed it.

It turns out that Indiana's Democrat legislators have also fleebagged to Illinois.

It would appear that Democrats hate the democratic process. They lost the midterm elections in a historic landslide. And instead of manning up and voting, they're running away once again to expressly ignore the voters' will.

As Mark Hemingway asked the other day, "After Wisconsin, How Do Democrats Argue Against a GOP Government Shutdown??"