The unofficial public relations arm of the Obama administration reports that the White House and the DNC really had nothing at all to do with the public service union protests in Madison.

Over the weekend, the White House and Democratic Party officials pushed back against criticism from Republicans that Mr. Obama and his political network were meddling in the Wisconsin dispute.

Administration officials said Sunday that the White House had done nothing to encourage the demonstrations in Wisconsin — nor was it doing so in Ohio, Florida and other states where new Republican governors are trying to make deep cuts to balance their budgets...

...And, officials and union leaders said, reports of the involvement of the Democratic National Committee — specifically Organizing for America, the grass-roots network born of Mr. Obama’s 2008 campaign — were overblown to start with...

... "This is a Wisconsin story, not a Washington one,” said Dan Pfeiffer, the White House communications director. “False claims of White House involvement are attempts to distract from the organic grass-roots opposition that is happening in Wisconsin."

These are outright fabrications. In fact Brad Woodhouse, the Democratic Party Communications Director, was spotted crowing about Obama's involvement as recently as Thursday.

And Obama's political wing -- an extension of the SEIU, it would appear -- is still hawking the protests. According to Politico's Ben Smith, it has published at least 54 tweets promoting the rallies. 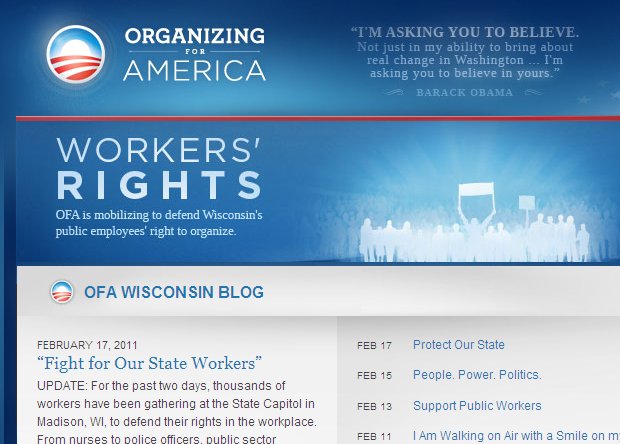 These mendacious economic illiterates must be defeated.

We the citizens of Wisconsin are the OFA. You can't stop citizen uprisings. Isn't that what the tea party was about?

With the coordination of the DNC, Whitehouse and out of staters too FIBs from Chicago?!)? Yeah, "uprising".

Jay Carney was last seen crouched under his podium.

He came out for one question, but then he saw his shadow and went back under.

actually Walker is trying to break the unions because he gave about $140 in tax breaks to the people and companies that supported his election. Before he took office there was a budget surplus and now strangely there's a deficit. Oops! Nice try republicans. stay classy.

And they are supposed to be the brightest of us. Ha!

The $140m does come into effect until after this budget cycle. Nice try, Radical Madcow tried that line on MSNBC

$140,000.000.00!? Great googly moogly! Allowing individuals and companies, companies who would never be forced to pass on the tax burden to consumers or downsize/reduce staff, to keep their business viable or hang on to their earned income!? Shameful...
Especially in this prosperous economic climate.

And Medical Savings Accounts? Next thing you know, people might get all uppity and think they are entitled to make their own decision on health care.

Obama took a stand for bloated union benefits and gold-plated retirements at age 50.

Then the poll numbers came in and Bada-Bing! The overpaid unions were thrown directly under the bus.

2012 is gonna be a disaster for the Dems. They have been cornered. They either defend their overpaid union cronies or they abandon their kickback base.

It's almost too good to be true.

so he gave a $140 million tax break and did not have this in a budget surplus? How is that better?

This is not a citizen uprising, it is whining from the spoiled brat unions.

Electing a guy that promised to end collective bargaining for teachers? THAT'S a citizen uprising.

I was also unaware that it was illegal to save money for medical procedures. I just thought that you had to do this with after tax dollars now. Wow, I learn all kind of things from "Anonymous" conservatives.

Wow and union members are not citizens. I am learning tons from the blog. You guys are full of information.

THANK YOU for printing this! We are all over this over at Common Cents...

"I was also unaware that it was illegal to save money for medical procedures."

Not illegal, but now, like people in many other states, people in Wisconsin can save money, pre-tax, into a MSA... ah, excuse me, I see that Wisconsin calls it a HSA account. http://benefitblog.com/?p=639

If I understand the complaints that have been made regarding the $140,000,000.00 tax cut correctly, it was that the legislation included this change to make HSA account pre-tax contributions available to all Wisconsin citizens.

Please, correct me if I am wrong.

- Anon III, but you can call me Anon.

The Minnesota/Wisconsin payment and the identified shortfalls total $258.1 million. These amounts are not reflected in the January 31 condition statement because legislative and executive action would be required between February 1, 2011, and June 30, 2011, to address them. If the entire $258.1 million was to be addressed before June 30, 2011, the gross general fund balance would be -$136.7

"Before he took office there was a budget surplus and now strangely there's a deficit."

Nice try. Back to the Short Bus for you.

It seems so very few people (including elected to do so) actually read bills. Read the bill, know what public employees can and cannot negotiate and then have the discussion. If you are a taxpaying private sector employee you will have one view, if you are a taxpaying public sector employee you will have another. If you don't live in Wisconsin (and happen to be the President) stay out of it -- The states, by law, must balance budgets.

Too much noise, too much politics, too much excuse to create chaos when so few people ACTUALLY read the bill.... this was the same for stimulus, healthcare, Arizona and the list goes on.

IF YOU WANT TO MAKE THE ARGUMENT< DON'T REPEAT THE NOISE< ACTUALLY READ THE BILL AND 90% of these noisy displays go away because those that would rally you count on you NOT checking the FACTS. They have you trained to march without thinking -- DANGEROUSLY SO.

The overbearing question to this line of thinking is = so what? Why is it wrong for ANY citizen to take a stand for or against ANY action but ANY level of government? If this was a move against disbanding the Tea Party am I to believe the GOP would stand on the sidelines? If your going to argue the issue, argue the issue, not some drummed up "wrong" that you think will make headlines.

@BigCity - no one is disbanding anything. The governor wants to have these workers pay a modest amount of their retirements and health care... and remove collective bargaining for benefits to help small school systems that can't fight the unions during negotiations.

It's the union monopolies against the taxpayer... and, sooner or later, the unions will lose because the current plans are collapsing.

President Obama "ELECTIONS HAVE CONSEQUENCES" EXCEPT IF THEY GO AGAINST MY SOCIAL JUSTICE..................

Obama supports that if you loose an election, you just grab all your toys, storm off and go into hiding to avoid your sworn duties.

Obama is supporting anything that you can do to subvert the American voters will, is OK with him.

The Dem reps learned from the best.