President Obama likes to call the current financial crisis the "worst since the Great Depression". And I think we all would admit that the meltdown was fueled, in large part, by bad loans backstopped by the American taxpayer through Fannie Mae and Freddie Mac.

So where are the investigations? Where are the criminal charges? Why isn't anyone serving time, especially the Democrats who raped and pillaged Fannie and Freddie -- for hundreds of millions of dollars -- before it collapsed? Well, for obvious reasons, Nancy Pelosi and Harry Reid stonewalled investigations because it would cost them political capital.

Thankfully, now that the American people have booted Pelosi out of the speaker's seat, we may soon learn the rest of the story. 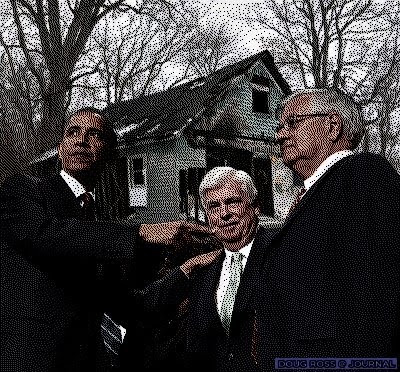 Taxpayers wanting the whole story of how Countrywide Financial used its VIP loan program to grease politicians and reward its partners at Fannie Mae and Freddie Mac may soon have it. Thanks for this belated act of political hygiene go to House Oversight Committee Chairman Darrell Issa, who Wednesday issued a subpoena to Bank of America, which bought Countrywide during the financial crisis.

By March 7, the bank will need to produce all documents related to the company's VIP program, also known as the "Friends of Angelo" program in honor of former Countrywide CEO Angelo Mozilo. Mr. Mozilo ran the subprime factory at the center of the housing bubble. Sweetheart loans for his "friends" at Fannie, Freddie and on Capitol Hill were part of a strategy to keep the mortgage party going, with minimal oversight of the loans originated by Countrywide and then guaranteed by Fan and Fred (and taxpayers).

In 2009 Mr. Issa persuaded then-Oversight Committee Chairman Ed Towns to issue a similar subpoena. But to protect the less-than-innocent, Mr. Towns asked that names be redacted. The identities of political "friends" in the House were sent only to the ethics committee, where they seem to have fallen down a well. Senate names were not shared with anyone.

Mr. Issa's new subpoena seeks the whole story, unredacted. The scuttlebutt is that most of the 30 Capitol Hill loans went to staff, not elected officials. But revealing internal discussions of why the firm helped "friends" like former Sen. Chris Dodd and Sen. Kent Conrad may suggest important reforms. However that turns out, it probably won't take a subpoena to understand why such reforms were absent from the law Mr. Dodd co-authored last year.

Dodd has never come clean on the full extent of his shady dealings with Countrywide. Which is why he no longer serves the fine people of Connecticut in the Senate.

Now, given all of this information, does it strike you as odd that Dodd and co-conspirator Barney Frank authored the latest "financial reform" bill?

Yes, it does, doesn't it? Criminally odd, in fact.


Update: Jane Jamison is underwhelmed with the choice of opening salvo.