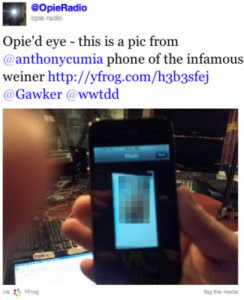 It was bound to happen.

The X-rated photograph of Anthony's Weiner that Andrew Breitbart obtained from one of the esteemed Congressman's sexting partners has made its way to the Internets.

Breitbart was unaware of this until earlier today. Anthony Cumia confirms that "Andrew Breitbart had no knowledge that this photo was being made public."

If you're feeling masochistic, the pic (little p) is over at Pat Dollard's website.

Me, I try to run a family-friendly blog here. That, and the fact that I just threw up in my mouth a little bit.

"Andrew Breitbart had no knowledge that this photo was being made public."

Strange, that was most probably the exact same thought that crossed Rep. Weiner's (D-NY) mind a week ago, only without the fear, embarassment, dismay, denial, panic and angst.

I disapprove of this. What's the point of humiliating someone until they get possibly suicidal? Just take the man's career for him--not his dignity as a human being.

Since when did we get so cruel? I don't like this at all.

I am disappointed that he showed the photo to Tweedledee Dee and Tweedledum Dumb. I thought Andrew was holding the higher moral ground.

I agree of how crule this country's becoming... unfortuntely I think you're right the democrats will still vote him be back in. he is a disgrace to his family and his position.

Are we the ones being cruel? Correct me if I am wrong, but the Congressman has refused to leave office. Until he does, this is all fair game.