Holy F'in Crap: Fast & Furious was 'so out of control' that it was arming a massive Mexican drug cartel for all-out war

Has anyone at MSNBC interviewed Eric Holder about this yet?

The failed federal anti-gunrunning program known as Operation Fast and Furious got so out of control in November 2009, it appeared the U.S. government was single-handedly "arming for war" the Sinaloa Cartel, documents show, even as U.S. officials kept lying to fellow agents in Mexico about the volume of guns it helped send south of the border...

The precise number of casualties in Mexico isn't known, but ATF officials confirm the murder of Mario Gonzales Rodriguez, brother of the Chihuahua attorney general, with a Fast and Furious gun.

Erudite as usual, Ace provides the Cliff Notes version of what would be the lock-of-the-week impeachment material for any Republican. 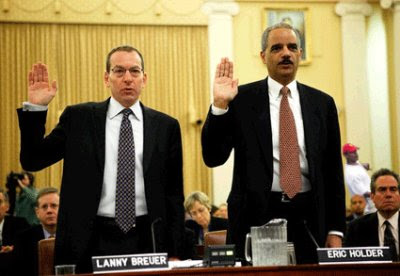 Let's see if I have this straight:

The smartest administration in the history of the world conceived of this plan.

The plan was to just let thousands of weapons flow to murderous drug cartels.

And then take those cartels down.

They instead were to follow the money, but they also didn't do that.

A US border agent was killed due to the illegal arms sent to a neighboring sovereign country in this massive covert operation.

In addition, so was the brother of a Mexican attorney general.

So were a number of other Mexican citizens murdered with these weapons -- we don't know the number yet.

In conducting this massive covert action, we lied to officials in this neighboring sovereign country, even though their people (and cops, and officials) were getting killed with our weapons.

As far as I know, we haven't taken any action beyond arresting a few straw buyers... who could have easily been arrested, with the weapons, when they attempted to smuggled them or sell them.

We have not taken down any cartels at all.

In fact, we've not done anything except murdered people by indirect, but perfectly foreseeable, US covert action.

And the only outlet that is following this is FoxNews, so you can tell Fox is biased.

Ace forgot only one element: the DOJ's reaction to their failed attempt at fomenting a Mexican civil war? Promotions all around!

Now the dems win because 1) they get more voters and 2) they use the guns as an excuse to strip legal owners of their 2nd amendment gun rights.