The Master Chief reminds us that the dumbest vice president in American history likely played a role in the tragedy that saw 31 special operators killed, 25 of whom served in the ultra top-secret SEAL Team Six.

...It is believed that many of these men were the ones that brought Usama Bin Laden to justice. This is a double tragedy. First, the loss of any American fighting personnel is tragic. Second, SEAL Team Six is the best of the best! Replacing them is difficult at best and probably impossible.

The Taliban has taken credit for this kill. I suspect that they were tracking SEAL Team Six ever since the OBL event. How did the Taliban know who did the OBL job[?] Vice President Biden told the press[!] He blabbed [about] a top secret op in the open to the press to look good! This moron is a danger to the security of America not to mention the lives of American fighting personnel. 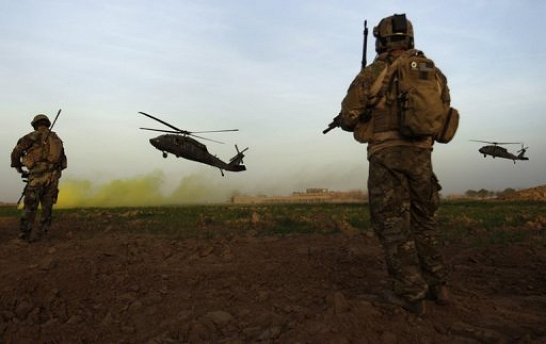 SEAL Team Six has been in operation since the early 1980's. It was established by President Reagan. They have accomplished many missions and saved many lives, all under the cover of secrecy. Even their base of operations was classified. Their secret compound was double guarded and secure within the confines of a Naval Training Base. They wore civilian clothes, grew beards and long hair, did not carry military ID cards and did everything in secret. That lasted, until this administration. The Vice President's reckless abandonment of security [practice] has lead to the death of 31 military members including 25 members of this elite team. He should be tried for treason and murder in my book. His desire to "look good to the press" by showing them he knew what was going on, permitted the Taliban to track and kill these men. If this was an enlisted man, he would be in a Courts Martial this morning and hung this afternoon. But not Vice President Biden. No, he will continue to be a threat to the lives of our military and the security of our Nation.

I have known about Six since 1980, when I was the GMG detailer. I toured their facility in 1987 when I was the Force Master Chief of the Surface Forces, U.S. Atlantic Fleet. I am proud to have know some of these men, past and present, who have defended freedom, quietly, secretly, and very effectively for the last four decades. Now I fear they will cease to be viable because their cover has been blown by a politician of the lowest denominator. A politician who will sacrifice anyone, lie about anything, and plagiarize anyone, to look good to the press and to get re-elected. Power corrupts, absolute power corrupts absolutely. Remember this event, these deaths in November 2012!

Let's rewind to May of 2011, when London's Daily Telegraph exposed what most of our far left-wing media outlets failed to report.

Since President Barack Obama announced that “a small team of Americans” had killed Osama bin Laden, US government officials have carefully stuck to the line that they will not talk about which units were involved... Obama did not say it was the SEALs. In numerous television appearances, Obama’s counter-terrorism chief John Brennan didn’t and his deputy national security adviser Denis McDonough didn’t. Despite the numerous news reports that named the SEALs, none of the anonymous briefers from the CIA and Pentagon would confirm it.

...But here’s what the legendarily verbose and loose-lipped Vice President Joe Biden said at a dinner at Washington’s Ritz Carlton Hotel last night...

Let me briefly acknowledge tonight’s distinguished honorees. Admiral James Stavridis is a, is the real deal. He can tell you more about and understands the incredible, the phenomenal, the just almost unbelievable capacity of his Navy SEALs and what they did last Sunday... 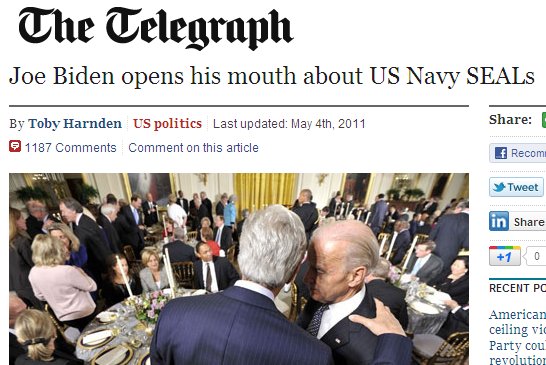 ...Folks, I’d be remiss also if I didn’t say an extra word about the incredible events, extraordinary events of this past Sunday. As Vice President of the United States, as an American, I was in absolute awe of the capacity and dedication of the entire team, both the intelligence community, the CIA, the SEALs...

Biden, as has been proven over and over again, is an outright idiot.

May God Bless our brave warriors and their families.

They are far too brave and far too good for our current breed of feckless politicians. As the Master Chief reminds us: 2012 is coming and we must vote in the most conservative citizen-politicians into office that we can find. We must support men and women who believe in and abide by the Constitution.

More to the point: we must politically obliterate the hapless, lying, power-hungry, political hacks who believe themselves to be some kind of permanent ruling class. In a general sense that translates to primarying RINOs and then defeating Democrats at every level of government. The Democrat Party has been hijacked by the 1960-retread Marxist left. It's bent on destroying this country and capitalism with it. The modern Democrat Party must be politically crushed.

With all respect due to the MC, I disagree. I doubt that anyone was tracking DevGru specifically and this particular mission simply gave the enemy the opportunity to get off some lucky shots and take these Heroes out.

As much as I hate Biden and this incompetent administration, Slow Joe Biden had virtually nothing to do with this situation.

I agree with TheBronze.. Biden is an idiot but it's ludicrous to think these guys were tracked down. Simply naming the team that carried this out wasn't really a big deal. There's only a few units that one would expect to be tasked with something this secretive.

dingsniThe header is right. These men were sent into a heavy raid and the question is WHY. Man count and a dog suggests they were sent after a high priority target and who's to say this wasn't an Obama effort to capture someone special.
THANKS JOE BIDEN for outing the SEALS and THANKS KARZAI for tipping the Taliban off. May you rot on the ash heap of history.

Apologies, but any operational details can and must not be disclosed. Even the tiniest bits of information can help the enemy construct a complete picture.

Never, ever, ever disclose anything about an operation.

That includes Obama, he could have told Biden to STFU, and didn't. He bragged about day after day, strutting his s*it, puffing his chest, telling the unit 'you guys make a good photo up'.
Something isn't right, whether it was a leak etc...we are entitled to know, congress should take a close look why these men had to die.
They deserve at least that from our government!!!

From the minute Biden publicized which team took out Bin Laden and WHERE they were based out of in the states, that it was going tolead to tragedy. Ithought it would happen here, not there. But it happened. I don't believe in coincidences this big.

This Biden, who has ALWAYS been a big mouth moron, should be tried for national security leaks. I hold him responsible for their deaths.

Hey Biden, their blood is on your hands, you irresponsible jerk.

Wow, is there really nothing you won't use for political point scoring?

2 months ago Joe Biden became the 7millionth person to state that ST6 carried out the raid, which is what tipped off the Taliban to their involvement, not the 24hr news coverage for a week saying the same thing.

All you really wrote here is that you have no morals.

"THANKS JOE BIDEN for outing the SEALS"

Wait, didn't Charlie Sheen do that like 15 years earlier?
Shit, not only did he let on that they exist but also that they're armed! OMGZ, who would have known!

Pretend outrage while point-scoring off the deaths of heroes. How could you sink any lower if you wanted to ?

Biden is a chump. The cracked head club won't even accept him. This Demonic Duo in office is a danger to our country, our troops, our people, everything. Their Monster Egos are insatiable and no doubt they'd give it all up to suck each other off with raves of how great they are and how amazing they are...If the SEALs were on a special op, divulging info. IS NO DOUBT A BIG SCREW UP. Between Obama and Holder's Fast and Furious Fiasco with Border Agent Brian Terry and an I.C.E. Agent's blood on their hands to all the other illegal, tyrannical maneuvers of pushing legislation through without presentation to Congress, these two, and other Administration heads should be dropped off in the middle of the most desolate desert in Afghanistan, left to find their way to wherever... Oblivion would be best for all.. The most self centered, negligent, reckless, soul less douche bags on the planet.If Congress won't get the job done, and they're even given the opportunity to run for another term, all Hell is going to break loose. At best, they should be concerned for their own welfare. There are some serious people who are beyond fed up with these smug dictatorial power drunk thieves. GET THEM OUT OF OUR FACE!!!!

would y'all get out the word to your family, friends, neighbors, and co-workers (if anybody but the UNION fat cat GOVT workers STILL has one) to get conservative in nov 2012

Why the hell was the National Guard flying so many SEALs in a standard CH-47 when SOP is at least 3 hardened MH-47s from 160th SOAR would be doing it?
http://www.1011now.com/home/headlines/Lincoln_Native_Killed_in_Afghanistan_Helicopter_Crash_127089778.html?storySection=story

Biden is an idiot. I don't need to be convinced. What I say of O'bama is that he knows EXACTLY what he is doing. Biden--not so much. My "anger" will not be forgotten as 2012 approaches, I am only more sure that I was right in NOT voting for the Dumb Duo, I am sure spreading the word of their evil is worth the time and effort. Thank you for your outstanding article. Check me out sometime at The People's Country: country4thepeople@blogspot.com Jennifer Jessee

This is the best article yet on this debacle, it was a trap.
http://news.yahoo.com/us-helicopter-shot-down-taliban-trap-afghan-official-070456126.html

mlgunner is right.
One could also add the cost of traning a SEAL. In the basest sense there was WAY too much money in one plane, and a slow one at that. Where did the order to do this come from?

this goes to show Conservatives and Liberals are a like. Both will find anything to point a finger. It's not like no one has ever heard of that team before. Fact of the matter is those dudes work in a dangerous environment. This is horrible reporting. RON PAUL 2012!!!!