For decades the progressive left warned us that liberalizing concealed carry laws would turn America into the Wild West. That the streets would run red with blood. That road rage incidents would turn into shootouts.

And, as usual, they were wrong.

...East Baton Rouge Sheriff's spokesman Greg Phares says Officer Brian Harrison was escorting a funeral procession Friday when he pulled Temple over and wrote him a ticket for breaking into the procession. According to Phares, that's when Temple attacked Harrison. Police say Perry Stevens was walking outside of the Auto Zone on Greenwell Springs Road when he heard Harrison yelling for help. Harrison was reportedly on his back with Temple on top of him. That's when Stevens went to his car and grabbed his .45 caliber pistol. 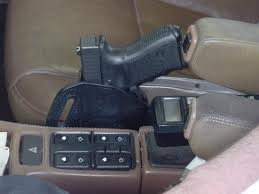 According to Col. Greg Phares, "[Mr. Stevens] orders Mr. Temple to stop and get off the officer. The verbal commands are ignored and Mr. Stevens fires four shots, all of which struck Mr. Temple."

Perry Stevens fired four shots into Temple's torso. Officer Harrison had already fired one shot into Temple's abdomen. With Temple still struggling with the officer, Perry continued to advance toward the scuffle.

"He again orders Mr. Temple to stop what he was doing and get off the officer. Those commands are ignored and he fires a fifth shot and that hits his head. The incident is over with, and as you know, Mr. Temple is dead."

Police are calling the shooting death justified. Perry Stevens has a permit to carry a concealed weapon...

And isn't it strange: the areas where citizens are unconstitutionally barred from arming themselves -- like Chicago -- have become more deadly than Afghanistan.

February of 2006 called, it wants this story back!