THE WAR ON POVERTY: $21 Trillion Later, Government Has Only Made Things Worse

The War on Poverty has barely made a dent in actual poverty, states the 205-page report unveiled last month by the House Budget Committee, which is chaired by Rep. Paul Ryan (R-Wisc.). 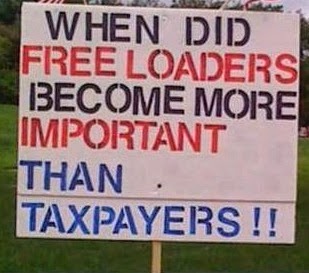 The paper, created in the hope of starting a discussion in Congress about reforming America’s bungled poor-relief programs, came out before Ryan released the GOP’s new budgetary blueprint yesterday that lays out how to balance the budget in 10 years. That document calls for reducing federal government spending by $5.1 trillion over a decade largely by getting a grip on out-of-control social programs. The House Budget Committee could vote on the fiscal plan as soon as Friday. Leadership in the Democrat-dominated Senate, which hasn’t even tried to adopt a budget in recent years, isn’t planning to craft a fiscal blueprint this year, either.

The heart of the War on Poverty report is its observation that most federal poverty-alleviation programs are essentially useless or incapable of having their impact measured in the real world.

The study observes that in 1965, the poverty rate was 17.3 percent. In 2012, it was 15 percent. This means taxpayers blew a staggering $20.7 trillion over the last half century in order to achieve a paltry 2.3 percentage point decrease in poverty.

Broken down into less mind-blowing, easier-to-grasp figures, between 1965 and 2012 the average family of four spent roughly $146,000 per percentage-point drop in poverty, or $335,000 per family for the whole 2.3 percentage-point reduction.

Only the most blinkered or jaded among us in the body politic believe that sucking $9 trillion out of the private, productive economy for each single percentage-point reduction in the poverty rate constitutes an acceptable return on investment.

Which brings us to the modern “progressive” Left.

Those on the Left consider the gentle statistical dip in poverty over five decades to be social progress achieved by way of holy coercive redistribution. Mere results have always been less important to the Left than intentions. 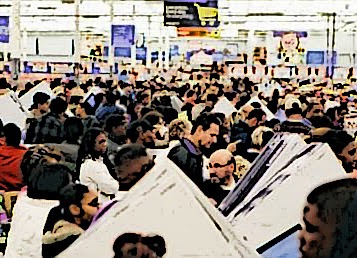 Although a sane person would consider the extremely modest reduction in poverty a humiliating defeat, left-wingers have successfully been changing the subject, hurling epithets, smearing opponents, and intimidating adversaries, all in an effort to move the discussion away from their 50 years of human misery-generating policy failures.

The Obama White House self-servingly slices and dices the statistics to portray the War on Poverty as a smashing, if flawed, success.

While the Obama administration admits that some of the government’s poverty-fighting approaches are less than optimal, President’s Obama Council of Economic Advisers issued a ringing endorsement of the War on Poverty.

According to that body, poverty has declined by more than one-third since 1967. “The percent of the population in poverty when measured to include tax credits and other benefits has declined from 25.8 percent in 1967 to 16.0 percent in 2012.” Predictably, the council opines that “[d]espite real progress in the War on Poverty, there is more work to do.”

The council also obsequiously slaps President Obama on the back, praising him for taking steps to “further increase opportunity and economic security by improving key programs while ensuring greater efficiency and integrity.”

It then moves from servile flattery to outright revisionism, claiming that Obama’s actions have “prevented millions of hardworking Americans from slipping into poverty during the worst economic crisis since the Great Depression.”

OBAMA: Big government, a lawless administration, and radical attacks on civil society aren’t worth worrying about

Ever the class warrior, in a December address on income inequality, Obama showed just how much a prisoner he is of his own self-imposed ideological bubble. Without mentioning the devastating impact that the high tax rates and runaway social spending he ardently supports have had on American society, the president argued that it’s all deterministic, all the fault of capitalism. He said: 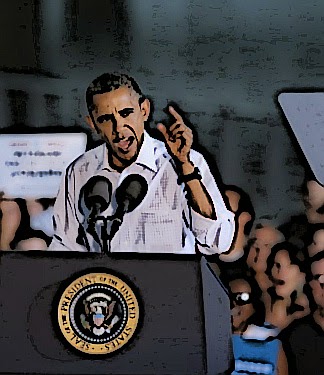 “But we know that people’s frustrations run deeper than these most recent political battles. Their frustration is rooted in their own daily battles—to make ends meet, to pay for college, buy a home, save for retirement. It’s rooted in the nagging sense that no matter how hard they work, the deck is stacked against them. And it’s rooted in the fear that their kids won’t be better off than they were.”

Big government, a lawless administration, and radical attacks on civil society aren’t worth worrying about, according to Obama.

It is “a dangerous and growing inequality and lack of upward mobility that has jeopardized middle-class America’s basic bargain—that if you work hard, you have a chance to get ahead.”

This is “the defining challenge of our time,” he said, even though Americans don’t give a farthing’s cuss about economic inequality.

That challenge consists of “making sure our economy works for every working American,” Obama declared, slyly anthropomorphizing the economy, an intangible abstraction, in order to push the illusion that markets, like animals or streams, can somehow be controlled and centrally managed.

All of this rhetorical blatherskite had its heyday in the awful 1960s, an era historian Paul Johnson correctly described as “America’s suicide attempt.” Instead of being satisfied with New Deal-era programs like Social Security, left-wingers resolved to move America even farther away from its founding ideals, fundamentally changing the country by erecting a supremely sclerotic behemoth welfare state answerable to no one. 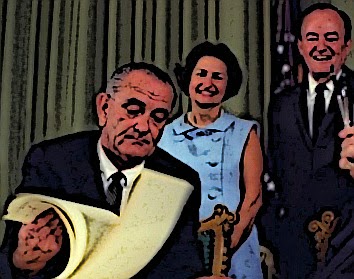 The War on Poverty itself was a part of the massive left-wing social engineering and vote-buying scheme known as the Great Society. This war really should have been called the war on American values. As a result of misguided government policies that grew out of the War on Poverty, social evils have not only been encouraged but subsidized with taxpayer dollars. For example, out-of-whack financial incentives have caused out-of-wedlock birthrates to mushroom, as David Horowitz and John Perazzo reported in “Government vs. the People.”

In his first State of the Union address on Jan. 8, 1964, President Lyndon Johnson ushered in a half-century of government-incentivized sloth, indolence, dependency, and social decay. He exhorted Congress to launch a new belligerency against a perpetually ineradicable foe.

“Let this session of Congress be known,” Johnson exclaimed, “as the session which declared all-out war on human poverty and unemployment in these United States.”

The Economic Opportunity Act (EOA) of 1964 became the centerpiece of the new war.  It expanded the nation’s social safety hammock, turning government resources into war materiel to be used against the American system of constitutionally limited government.

The War on Poverty gave taxpayers’ money to so-called community groups like ACORN and Saul Alinsky’s Industrial Areas Foundation in order to encourage them to agitate against the status quo. This, in turn, stimulated demand for more government spending as taxpayer dollars became a kind of ever-increasing subsidy for pro-big government activism. The federal government still hands out significant grants to left-wing groups to subsidize their efforts to take away our economic freedoms. Many of the EOA-created programs still exist today, including VISTA (Volunteers In Service To America), now known as AmeriCorps VISTA, Job Corps, and Head Start.

Many more excuses for handouts were created after the mid-1960s—so many, in fact, that it is difficult nowadays for poor people to tiptoe through the ever expanding minefield of government assistance unscathed.

Loud calls for yet more welfare spending continue unabated from the echo chambers of the Left every single day whether the national economy is good or bad.

These calls come even after the country has saturation-bombed poor people with welfare over the past 50 years, to the tune of $20.7 trillion in 2011 dollars, far exceeding what the U.S. has spent on every actual, non-figurative war it has fought. Federal and state welfare spending, adjusted for inflation, is now 16 times greater than when this phony war was declared, according to Robert Rector of the Heritage Foundation.

While millions of Americans remain stuck in poverty, the House Budget Committee’s white paper from March inventories a dizzying array of expensive failed programs on which mountains of money have been lavished.

Let’s look at some of the eye-popping numbers involved in the major aid category of cash aid.

There were three federal agencies involved in spending $220 billion on cash aid in fiscal 2012. They are the Social Security Administration, Department of Health and Human Services, and Department of the Treasury.

Created in 1974, the Supplemental Security Income program provides cash benefits to elderly, blind, or disabled persons with limited income and assets. It weighs in at $50 billion.

Temporary Assistance for Needy Families (TANF), created in 1935, provides assistance to needy families. In 2012 it weighed in at $16.7 billion.

The Earned Income Tax Credit, established in 1975, provides cash assistance to low-income working families. The EITC, which some analysts consider to be a rare federal anti-poverty success, is the largest measure in the tax code that is aimed at reducing poverty. In 2012, its budget was $59 billion.

The Child Tax Credit, enacted in 1997, provides assistance to families with children. The IRS spent a little over $57 billion on total child credits in 2013.

The Title IV-E Foster Care/Adoption Assistance program, created in 1997, helps states pay for arranging temporary homes for disadvantaged children or for facilitating their adoption. The federal government spent $6.8 billion on the program in 2012.

But most of the 92 federal poverty-alleviation programs have a mediocre to downright dreadful track record of helping people in need.

To make matters worse, over the past three years, “deep poverty” has reached its highest level on record and about 21.8 percent of children live below the poverty line, the report states. Although changing demographics and slow economic growth contribute to continued poverty, federal policies are also discouraging work. For example, a rapid increase in disability caseloads has shrunk the labor force.

“But a large problem is the ‘poverty trap,’” the report states. “There are so many anti-poverty programs—and there is so little coordination between them—that they often work at cross purposes and penalize families for getting ahead.”

Because these programs are means-tested—meaning that benefits fall as recipients earn more money—poor families face very high implicit marginal tax rates. The federal government, in effect, is discouraging them from making more money.

“Congress has taken a haphazard approach to this problem; it has expanded programs and created new ones with little regard to how these changes fit into the larger effort. Rather than provide a roadmap out of poverty, Washington has created a complex web of programs that are often difficult to navigate.”

Some programs work, some don’t, and with many of them, “[t]here’s little evidence either way.”

Federal programs are not only failing to address problems in society; in some ways they are making the problems worse

Federal programs are not only failing to address problems in society; in some ways they are making the problems worse. “Changes are clearly necessary, and the first step is to evaluate what the federal government is doing right now,” the report said.

But President Obama, neo-Marxist ideologue that he is, isn’t interested in making changes to anti-poverty programs. Obama is seeking $56 billion in new spending for a variety of programs expanding educational offerings for preschoolers and job training for laid-off workers. No doubt he’ll find a way to lard still more billions of dollars in so-called emergency spending onto the budget as the year progresses.

“The two sides have converged in terms of the problems they’re diagnosing,” said Alan D. Viard of the American Enterprise Institute. “But the solutions are very far apart.”

That is an understatement.

Matthew Vadum, matthewvadum.blogspot.com/, is an investigative reporter at a watchdog group in Washington, D.C. His new book Subversion Inc. can be bought at Amazon.com (US), Amazon.ca (Canada), and as an e-book at Kobo (Canada).

In answer to the question in the sign, freeloaders became more important than taxpayers when taxpayers stopped making an effort to vote and freeloaders found they could vote themselves increased benefits.