BOOM: True The Vote Sues Mississippi GOP -- and by Extension, the GOP Establishment -- Over Vote Fraud

True the Vote, the citizens initiative pursuing “free and fair elections for all Americans,” and 13 other plaintiffs have filed a lawsuit in federal court against the Mississippi Secretary of State and the Republican Party of Mississippi over the June 24 primary election runoff in which Sen. Thad Cochran edged tea-party challenger Chris McDaniel. 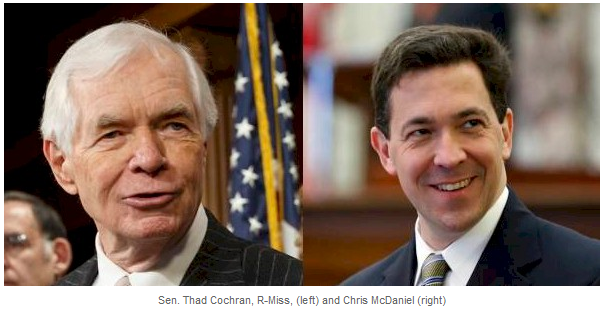 The lawsuit asks the court to grant immediate access to voting records to inspect for possible illegal voting. It asserts that “defendants failed to properly abide by federal election record maintenance and open records provisions codified in the National Voter Registration Act of 1993 (NVRA). Records made partially available to the plaintiffs indicated ‘double-voting’ from Democratic to Republican primaries – potentially diluting votes in violation of the Equal Protection Clause.”

“All we are asking is that the Mississippi State Republican Party follow the law; allow their designated county representatives to inspect the poll books and ballots, give them the review time they are permitted by law, and allow them to uphold their responsibility to Mississippi voters … True the Vote has been inundated with reports from voters across Mississippi who are outraged to see the integrity of this election being undermined so that politicos can get back to business as usual. Enough is enough,” said True the Vote President Catherine Engelbrecht.

McDaniel won the June 3 state GOP primary with a margin too small (about 1,500 votes) to avoid a runoff. Cochran won the runoff with 7,000 votes, allegedly by convincing thousands of black Democrats to cross over and vote for him in the runoff.

One campaign flyer in particular claimed McDaniel intended to prevent blacks from voting. A radio announcement implied that McDaniel was going to defund welfare and urged blacks to vote for Cochran: “By not voting, you’re saying, ‘Take away all of my government programs, such as food stamps, early breakfast and lunch programs, millions of dollars to our black universities …’”

The McDaniel campaign has been considering a legal challenge since the day of the runoff. McDaniel alleges that Democrats made thousands of illegal crossover votes in the runoff, having already voted in the Democratic primary. Two days after the runoff, he reported having found over 1,000 votes in Hinds County alone – the state capital seat – in which voters allegedly voted in the Democrat primary, then crossed over to vote in the GOP runoff.

Reached on Tuesday, McDaniel Campaign Communications Director Noel Fritsch says that number has now increased to about 1,500. Another 600 to 800 have been found in Pine Belt counties.

“We are on the ground in 75 of Mississippi’s 82 counties but we have not yet accessed half the counties’ poll books,” he said. “Many people are coming forward with accounts of irregularities in the precincts and on the ground within the communities.”

True the Vote has been monitoring the Mississippi Republican primary runoff from the beginning. On June 21, the group released figures showing unusual voter turnout patterns based on historic data and on June 25, sent a letter to Mississippi GOP Chairman Joe Nosef asserting that “violations of Mississippi and federal law have occurred” and warning of possible legal action:

“The systematic refusal to allow qualified poll watchers the ability to be present, to examine absentee voter qualifications and challenge where appropriate, creates an inappropriate cloud on any result of this important election. In order to avoid potential state and federal legal challenges we request that you preserve all absentee ballot applications, absentee ballots and accompanying mailing envelopes until the challenges to them can be resolved …”

The election has seen an endless string of twists, turns and allegations. Hinds County GOP Chairman Pete Perry has been criticized because he runs a consulting firm that was paid $60,000 by Mississippi Conservatives, a PAC created to support Cochran. Prior to the runoff, Mississippi Democratic Party Chairman Rickey Cole posted in Facebook that some Democratic Party activists were working with Perry to convince black Democrats to vote for Cochran. According to the Clarion-Ledger:

“Large sums of cash are being passed around,” Cole said in the Facebook message. “These guys are old-school ‘walking around money’ vote buyers. It is happening in Hinds County, but they are trying to move black voters in the Delta, Adams (sic), Jefferson (sic), and Claiborne (sic) too.”

Mississippi Conservatives PAC represents a who’s who of the state GOP establishment. It is run by Henry Barbour, RNC member and nephew to former Gov. Haley Barbour, a lifelong Cochran friend and supporter. Henry’s brother, Austin, a Cochran adviser, and former campaign director for Mississippi Sen. Roger Wicker, was put in charge of the campaign following Cochran’s defeat in the primary. He was assisted in the get-out-the-vote effort by former state GOP Chairman Brad White. The National Senatorial Republican Committee sent field staff to help out as well.

Interestingly, Jeppie Barbour, Austin’s father and Haley’s brother, broke with the family and backed McDaniel. He stated, “I am for McDaniel because Congress spends too much money and Thad Cochran is right in the middle of spending and borrowing money… I resent my grandchildren having to pay for these politicians to party. I am ready for a change.”

In April, blogger Clayton Kelly sneaked into a nursing home to photograph Cochran’s Alzheimer’s-afflicted wife on Easter Sunday, an image that was later used in a video slamming Cochran. The blogger and three others were arrested for the stunt. One of them, attorney Mark Mayfield, a well-respected local attorney, committed suicide on June 27.

Just after the primary, three McDaniel supporters were found locked inside a local courthouse that also housed some primary ballots. They apparently became trapped after entering a rear door that locked behind them, and they sought out employees who could help them leave. The ballot boxes were stored in a secure area without access. No charges were filed.

In yet another twist, Pete Perry was arrested Saturday night on drunk driving charges.

In Mississippi, certification of primary elections is performed by the State Party Executive Committee, rather than the Secretary of State. The committee has a very short window to certify. On June 30 the Clarion Ledger published a memo Joe Nosef sent to county GOP leaders citing “confusion” over the process. He said counties must certify results by the morning of July 1, because the state committee must meet on the same day at 2 p.m. to canvass the results from the 82 counties. The state committee then has until the 7th to certify. According to Nosef, ballot boxes can be accessed, “only after the county committees have completed the certification process… Each party has 12 days from county certification to review the poll books and other ballot information.”

John Pittman Hay, a widely recognized Mississippi voting expert, stated that while Nosef is essentially correct, as far as state law is concerned, polling books in some counties remained open after the election. The confusion stems from the different ways counties handle polling books and ballot boxes, and changes in the law over the last 20 years. Polling books are maintained for each party and list names, addresses and birthdays of all registered voters and voting history. Comparing entries would reveal if, for example, a Democratic voters had voted in both the Democratic primary and the GOP runoff. However, since 1997, state law requires redacting date of birth, age, and Social Security numbers, so accurately identifying double voting is difficult.

Ballot boxes, on the other hand, contain paper ballots, absentee ballots, affidavit ballots, signature cards and other records. They are sealed after the election, and cannot be opened until after the county certifies. Campaigns then have 12 days to examine the contents. Some counties leave poll books in the ballot box, making them also inaccessible. Some keep poll books out. It is these latter records that the McDaniel campaign has likely already reviewed. While ballot box information becomes available after counties certify, the election challenge deadline starts when the state party certifies.

True the Vote’s lawsuit seeks to disable the redaction requirement and force the ballot boxes open based on federal law, whether the county has certified or not. It consists of three counts:

Seemingly on cue, a black Mississippi pastor claimed in an interview published Monday that he was hired to pay black Democrats to vote. Charles Johnson at GotNews.com posted an audio interview with Rev. Stevie Fielder, associate pastor at the First Union Missionary Baptist Church, who says he delivered “hundreds or even thousands,” of blacks to the polls after being offered money and being assured by a Cochran campaign operative that Chris McDaniel was a racist. “They [the Cochran campaign] told me to offer blacks fifteen dollars each and to vote for Thad.”

Fielder showed text messages from one Saleem Baird, a staffer for Sen. Wicker. Phone texts imply that Baird now works for the Cochran campaign. Johnson claims to have confirmed that the phone number connected to the text messages is indeed that of Saleem Baird. Baird is not new to notoriety, having been arrested in 2011 for running a strip club without proper permits. He was cleared of charges and remained on Wicker’s staff.

Fielder’s story was that he was he was promised $16,000 to provide names of Democrats who could be bought. He says he was never paid and now wants to sell what he knows. He was also paid to be interviewed.

The Cochran campaign called the allegations “baseless and false.”

we had all the info you needed then darn it, the hard drive crashed today and we did not have a backup system. dang it!! sorry about that

How does True the Vote have standing to make this challenge? McDaniel should step up personally.