Red ink: the government is drowning in it. The first two months of fiscal 2010 set a new record. Curiously, this report was issued late Friday -- the slowest news day -- and it has been completely ignored by state-run media.

In October and November,the government spent $292 billion more than it took in, the nonpartisan Congressional Budget Office said.

That was even worse than the same period last year, when the government was on its way to posting a record $1.4 trillion deficit for the fiscal year that ended Sept. 30.

The same period last year represented the eye of the financial storm. And yet 2010 is turning out even worse!

The annualized deficit for 2010 totals up to $1.752 trillion -- a disastrous and unpredicted shortfall -- but one as certain as loaded dice given the Democrats' catastrophic health and energy policies. 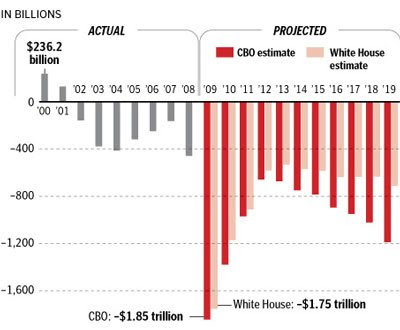 Updated for recent developments, it now looks like this. 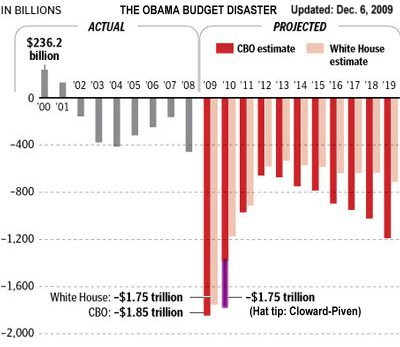 If the deficits continue to overshoot prior estimates, which they almost certainly will, the country is headed for total, hyper-inflationary meltdown: China and Japan will simply cease buying debt that can't be repaid.

Oh, and recall that these totals don't even include state and local governments -- like the Blue State Utopias of California, Michigan, New York and New Jersey -- that are hemorrhaging revenues and residents as fast as they can pack their belongings, stuff them in U-Hauls and clear out for greener pastures.

That deficit represents a 25% overshoot.